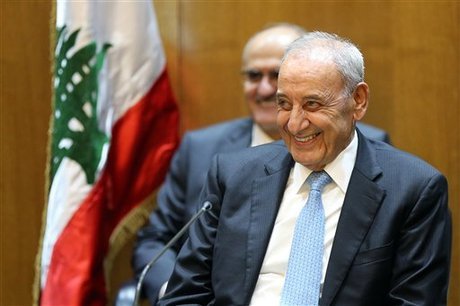 The Speaker is “working on several tracks to achieve his purpose,” including “pressing Geagea to endorse this plan,” the sources added.

To this end, the sources revealed that Berri is attacking on two fronts – the first is “promoting (LBCI TV owner) Pierre Daher as a serious and centrist presidential candidate in order to irritate the LF, especially that the Speaker knows the major LF sensitivity that would arise from proposing this name due to the deep dispute over LBCI’s ownership between Daher and the LF,” the sources said.

“According to Ain el-Tineh’s sources, this will push the LF to prefer endorsing Franjieh’s nomination should it sense any seriousness for Daher’s presidential chances,” the sources added.

Another point that Berri is allegedly using to press Maarab is represented in floating the issue of Tele Liban’s broadcast of the 2018 FIFA World Cup from the angle of raising financial suspicions over then-information minister Melhem Riachi, the sources said.

And now blackmail...I am not surprised...