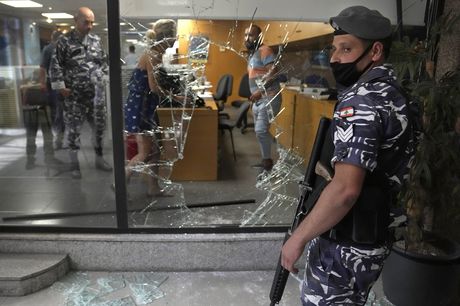 A depositor stormed Wednesday a bank in the town of Chhîm to retrieve his savings in order to fund his wife’s cancer treatment.

Depositor Walid Hajjar walked into the Credit Libanais Bank with his family, poured about gasoline and threatened to set the bank on fire if he did not get his money out.

Lebanon’s cash-strapped banks have imposed strict limits on withdrawals of foreign currency since 2019, tying up the savings of millions of people, leaving no other choice for Lebanese bank depositors but to take matters into their own hands.

Several groups advocating and protesting for Lebanese depositors have emerged since 2019, and in the past months, many depositors with or without a weapon have stormed banks demanding funds from their locked savings account. The majority needed their money for urgent medical bills, and were hailed by some Lebanese as heroes.

The standoff and public sympathy for those taking matters into their own hands to get their savings has exposed the depths of people’s despair in Lebanon’s economic crisis, which has pulled over three-quarters of the country’s population into poverty, unable to cope with skyrocketing food, electricity, and gasoline prices.

Meanwhile, Lebanese officials struggle to implement structural reforms for an economic recovery plan approved by the International Monetary Fund to unlock billions of dollars in loans and aid to make the country viable again.