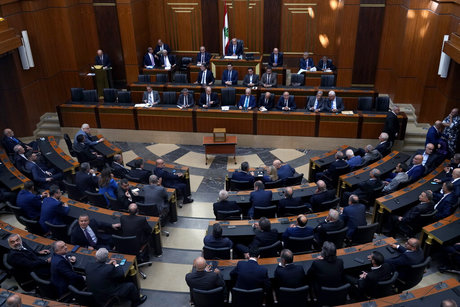 The committees had convened Tuesday, as depositors and activists rallied near Parliament to protest the law.

The Lebanese Depositors Association slammed Wednesday the capital control law, accusing it of violating the constitution.

It considered that the law is unfair as it was not preceded by a law that ensures retrieving the money that Lebanese politicians and people in power had transferred overseas.

"It is not acceptable that a politician could transfer his savings while the Lebanese people are being humiliated at the banks," the association said in a statement.

Since October 2019, banks have been imposing informal capital controls, barring depositors from reaching into their dollar accounts, as well as stopping transfers, amid a severe financial crisis.

The capital control law will impose official restrictions on transfers and withdrawals.

"Banks have been for three years unfairly imposing an informal capital control and the law today is legalizing the banks' violations against the depositors," the statement said.

The adoption of a capital control law is one of the reforms requested by the International Monetary Fund to financially help crisis-hit Lebanon.

MPs from different political parties have long said they will defend the depositors' rights.

"Our aim is to protect the depositors' savings and to stop the overseas transfers," Hezbollah MP Ali Fayyad said Tuesday after a session that discussed the law in parliament.

Reject Capital Control. They are trying to steal your money in another way.