Geagea says dialogue with Hezbollah is 'waste of time' 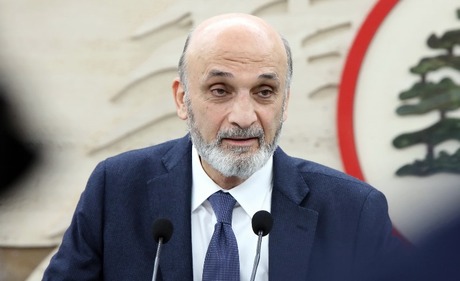 Lebanese Forces leader Samir Geagea has blamed Hezbollah and its allies for the crises that are gripping the country, noting that dialogue with them is of no use.

“We cannot exit the crisis through talking to those who caused it,” Geagea said in an interview with Asharq al-Awsat newspaper published Wednesday.

“Reaching an understanding with Hezbollah and the Free Patriotic Movement would be impossible, seeing as we have witnessed their practices and we know their truth,” the LF leader added.

Noting that Hezbollah “has a major project that is rooted in religion, history and geography,” Geagea said the Iran-backed party “wants dialogue to be able to impose its conditions.”

Moreover, Geagea said that the LF is not clinging to its presidential candidate MP Michel Mouawad nor Mouawad himself is clinging to his own nomination “if there is a convincing alternative who enjoys the same needed qualifications and can win more votes.”

Though strategically weak, surrounded by unimpressive figures, not understanding the importance of media and diaspora, and easily giving up on LBC; Geagea remains the best hope of Cedar Revolution and the politician most loyal to its principles of independence, democracy, freedom, justice and liberty. He did miss a unique opportunity prior to elections to promote a Cedar Revolution II peaceful million march after Batrak called for no arms outside army and positive neutrality. He must stick with these principles as the day he compromises he'll join the remaining political mafia. Hope he'll Keep an unwavering course upholding Cedar Revolution principles and not be affected by the many Judas politicians.

If Geagea is serious in the election of a President, then he must go into dialogue, both our political aligiances requires it.
Dialogue goes both ways, and not by pointing fingers and throwing slurs at one another.

A few examples of the usefulness of a dialogue with Hezbollah
- 2006 national dialog, Nasralla promises a quiet peaceful summer. Then lies by starting a war. -He then claims that if he'd known the extend of Israel response he wouldn't have started the war. He's either an idiot or he lied. Of course he knew, Gaza was still getting destroyed for a lesser attack on Israelis less than ten days earlier.
- Hezballah promised never to use it's weapons inside Lebanon and since hasn't stopped using them, overtly or covertly since.
- 2012 national dialog, Hezballah agrees to and signs "the Baabda Declaration" then reneges on it.