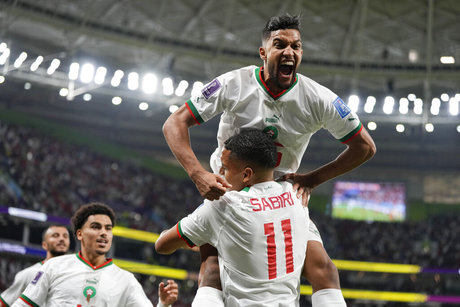 Morocco is seeking to reach the World Cup's knockout stage for the first time since 1986. Canada, already eliminated, is hoping to leave Qatar with its first win.

Morocco would advance with a victory or a draw on Thursday night, and also could reach the round of 16 with a defeat depending on the result of Belgium's match with Croatia.

The Atlas Lions opened with a 0-0 tie against Croatia before upsetting second-ranked Belgium 2-0 on goals by Romain Saïss and Zakaria Aboukhlal.

"We are a very difficult team to beat," said coach Walid Regragui, who replaced Vahid Halilhodžić in August. "We've matched two of the best teams in the world. That's what we need to continue."

Morocco would play Spain, Germany, Japan or Costa Rica in the start of the knockout stage. The North African team advanced in 1986 with 0-0 draws against Poland and England, followed by a 3-1 win over Portugal. West Germany won the round of 16 match 1-0 when Lothar Matthäus scored on a 30-yard free kick in the 88th minute.

Morocco and Canada have met once previously, a 4-0 victory by the Atlas Lions in a 2016 friendly as Hakim Ziyech scored twice.

Ziyech, a 29-year-old Chelsea midfielder, was dropped by Halilhodzic but returned to the national team in September under Regragui after a 15-month absence.

"A lot of people talk about him, about he is a crazy guy, he is a difficult guy to manage, he can't help the team," Regragui said. "For me, what I say, when you give him the love, the confidence, he can die for you. And it's what I give him. ... He is a big player, playing on a big team in Europe and you see he is a different player with the national team. All of the coaches give him the confidence, the same with the staff."

Canada is 0-5 in World Cup play, failing to score in its only other appearance in 1986. After outplaying Belgium for most of their opener this year, but losing 1-0, they took an early lead against Croatia but lost 4-1.

Alphonso Davies scored Canada's first World Cup goal, putting it ahead 68 seconds in with the fastest goal of this year's tournament.

"There's a lot for us to play for," Canada coach John Herdman said. "We came here to make history. The first game, they said they wanted to show fearless(ness) and entertain. They did that. The second game, they said they wanted to score goals, and if those goals were enough to win a match, then that would have been us with three points, but it wasn't. So this last game is about getting a result and winning for Canada and really making this country believe we're in the right direction for 2026."

Canada will co-host the next World Cup with the U.S. and Mexico.

Canadian midfielder Stephen Eustáquio left at halftime against Croatia because of a hamstring injury.