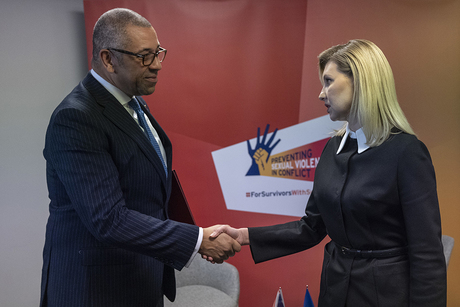 More than 50 countries, including Lebanon, and the U.N. agreed urgent action to end sexual violence in conflict at the UK-hosted PSVI Conference this week, signing up to a new declaration, the British embassy in Lebanon said.

The countries agreed to take action to address triggers such as gender inequality, remove the stigma faced by victims, and make sure national laws are in place to prosecute perpetrators.

Around 40 countries, including Colombia, Bosnia and Herzegovina and Japan have also gone further, and set out national commitments on the practical steps they will take to tackle these crimes and make a difference on the ground.

For example, Nigeria has committed to champion the Murad Code, a UK-backed code of conduct to ensure that the experiences of survivors of sexual violence in conflict are documented ethically and effectively.

The United States has committed $10 million over 2 years to support civil society organizations to document sexual violence in conflict in line with the Murad Code.

After Russia’s full-scale invasion of Ukraine, reports of sexual violence committed by Russian soldiers against civilians escalated. In addition, assessments conducted in Moldova, Poland, and Romania revealed high risks of organized trafficking and sexual exploitation and abuse of women and children.

British Foreign Secretary James Cleverly said: “Rape in war violates international values as severely as the use of chemical weapons. We must hold perpetrators to account and deliver justice for those affected.”

“By signing this declaration, we are clear that sexual violence in conflict is a line that should never be crossed. Now is the time to take real action globally to end this horrific crime,” he added.

When opening the conference, the Foreign Secretary announced a 3-year strategy to tackle sexual violence in conflict which will be backed by up to £12.5 million of new funding.

Minister of State at the Foreign Commonwealth & Development Office and the Prime Minister’s Special Representative on Preventing Sexual Violence in Conflict, Lord (Tariq) Ahmad of Wimbledon, said: “In the last 10 years, we have come a long way, but we know that much more must be done, both to help survivors and to prevent others from suffering such violence. Rape, torture, sexual violence is real, it is happening today. It is a shocking reality of our world in 2022.”

“Our aim is to make a long-lasting, tangible change in the lives of survivors, while preventing others from going through similar horrific ordeals in the future. We owe it to the courageous survivors who are an inspiration to us all,” he added.

Representatives from around 40 countries attended the 2-day conference in London, which brought the international community together to take action to end these horrific crimes.

The conference heard from survivors whose moving testimony demonstrated how sexual violence in war and conflict can shatter lives.

LF, the masters of sexual violence. All while hiding behind a red cross and christianity.