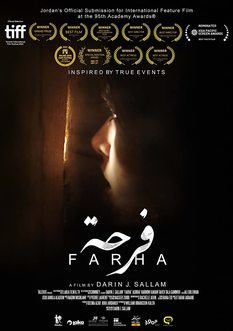 An Israeli minister on Wednesday condemned Netflix over a decision to stream a Jordanian film depicting alleged atrocities against Palestinians during the 1948 conflict that coincided with Israel's creation.

Avigdor Lieberman, the secular right-winger serving as finance minister in Israel's outgoing government, has also suggested withdrawing state funding from a theatre in Jaffa that plans to show the film.

"Farha", directed by Jordanian filmmaker Darin J. Sallam, tells the story of a 14-year-old Palestinian girl whose village comes under attack by Israeli forces, who are depicted executing civilians.

It will be available for streaming on Netflix as of Thursday after featuring in the 2021 Toronto International Film Festival.

"It's crazy that Netflix decided to stream a movie whose whole purpose is to create a false pretence and incite against Israeli soldiers," Lieberman said in a statement.

He also called a decision by Al Saraya theatre in Jaffa, which receives state subsidies, to screen the film "unacceptable".

"All the available measures, including denying funding" are needed, Lieberman said, "to prevent this terrible screening or similar films in the future".

Israel's culture minister Chili Tropper said the film shows "lies and libels", and Al Saraya planning to screen it "is a disgrace".

"I call on the theatre's management to change their decision to screen the film," the minister added.

The theatre director did not immediately respond to a request by AFP to comment on the screening.

"Farha" is not the first film to stir controversy over alleged Israeli atrocities in 1948, when more than 760,000 Palestinians fled or were forced from their homes.

Most recently, Israeli director Alon Schwarz faced widespread backlash over his 2022 documentary on an alleged massacre of Palestinians in Tantura, a coastal Mediterranean village in the northwest of what is now Israel.

Calls have mounted in recent years, including among Israeli activists, for greater transparency about the conduct of the then-nascent Israeli forces during the conflict.

Racism never explains itself. What is there to explain?