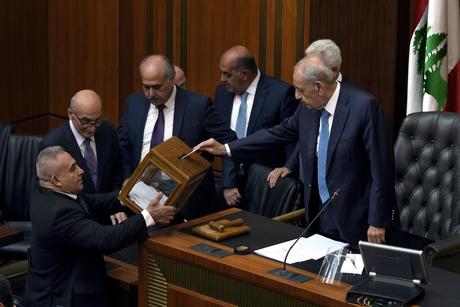 Parliament convened on Thursday and failed for the eighth attempt to elect a president who will succeed former President Michel Aoun.

Fifty two blank votes were cast and MP Michel Mouawad garnered 37 votes, a few votes less than the past sessions.

There was nothing new, except for the two new MPs Faisal Karami and pro-reformist candidate Haidar Nasser who attended their first presidential election session.

Karami is replacing activist Rami Fanj who had been supporting Mouawad for president, following an appeals process before the country's constitutional council, and Nasser is replacing Alawite MP Firas Salloum. Nasser said he will cast a blank vote.

"I voted for Consensus," Karami said after the session.

Only 111 of parliament's 128 lawmakers showed up for the vote.

Some MPs wrote in mock choices on their ballots, with one vote cast for Brazil's leftist president-elect Luiz Inacio Lula da Silva.

Parliament is split between supporters of Hezbollah and its opponents, neither of whom have a clear majority.

The Lebanese Forces, the Progressive Socialist Party and some change and independent MPs are endorsing Mouawad, while Hezbollah and its allies including Amal and the Free Patriotic Movement are casting blank ballots, as they are calling for dialogue and for a consensual president.

LF leader Samir Geagea blamed Tuesday Hezbollah and its allies for the crises gripping the country and said that "dialogue with them is a waste of time."

Jumblat responded to Geagea remarks, describing them as absurd. "Talking to all parties is necessary to reach a new president," he said.

Parliament Speaker Nabih Berri cancelled last month an invitation for a national dialogue that he had called for, following objections from the FPM and the LF.

In all eight sessions, Mouawad's tally fell well short of the required majority and was exceeded by the number of blank ballots cast by pro-Hezbollah lawmakers who would leave the session before the second round, causing a lack of quorum.

Some MPs say the two-third quorum is not required in the second round of voting, and others accuse Hezbollah and its allies of obstructing the voting for leaving before the second round.

Some suggested open sessions until a president is elected.

There have been delays in electing previous Lebanese presidents, but the failure to elect a successor to Aoun comes with Lebanon mired in an economic crisis the World Bank has dubbed one of the worst in modern history.

Parliament will convene for a ninth attempt to elect a new president on December 8.

Jumblat responded to Geagea remarks, describing them as absurd. "Talking to all parties is necessary to reach a new president," he said.

This is exactly what I fear. he is going to flip and align with Hizb and Vote for Franjieh. I don't why politicians cannot see not to rely on this flip flopper and never take his word for anything, where i a simpleton figured him out ages ago.

Rabiosa you are 100% correct. Jumblat was once a pillar of Cedar Revolution and the first to call for divorce after May 7 events in 2008. Now he is completely untrustworthy working against the interest of his community and Lebanon. This shows he doesn't really believe in democracy, sovereignty and freedom; the Cedar Revolution principles. This is sad as any idiot would know that minorities in any country thrive in democracy & rule of law and are blackmailed in any other form of government. Now he is stabbing Cedar Revolution hopes in the back and leading Lebanon to the abyss with his deal with Berri. Hopefully Taymour is a better politician.

The original Groundhog Day with Bill Murray was more fun.