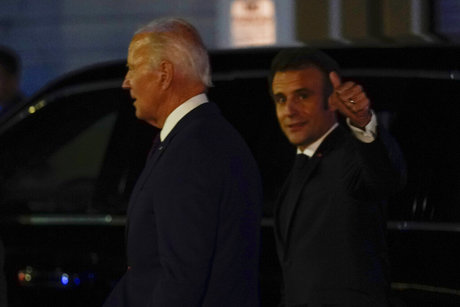 According to the source, the first choice is Army Commander Gen. Joseph Aoun. The second is reaching a compromise in which Marada leader Suleiman Franjieh would be elected as President, and in return, a Prime Minister from the opposition forces would be appointed. The third choice would be a moderate candidate.

The source expected that Macron would get a U.S. green light to continue his mission regarding the Lebanese presidential file and to communicate with Saudi Arabia and Iran.

Why can't we have a sovereign president that allows no arms outside army as in any respected country? All this because of a Veto from a criminal militia created, funded, armed and indoctrinated by Iran. Hizbollah is nothing but Iran's foreign legion and it is disgusting how our political mafia capitulated to Hizbollah blackmail and intimidation. If half the Shia voted for duo, time to divide Lebanon so we can recreate Lebanon with the other half of Shia and restore democracy, freedom and independence. Let Hizbollahstan mirror Iranian regime and become another big backward and oppressive prison for its people. Hey, let Hizbollahstan have the Cana gas fields if we can get rid of this cancer so Lebanon and its children have a future outside hell! Divorce now!

The other half of the shia did not vote for geagea, now did they? Who told you they want to split lebanon and choose "your side" of the border or that they aren't supporters of hizb and amal but chose not to vote (very common)? And who will rule your side exactly? The LF? Mustaqbal? Psp? You talk as if there is a united side with one vision and great leaders when in reality your side is run by civil war criminals with no clear vision nor real unity. The exception being mustaqbal who did not participate in the civil war. You can't be against hizb and amal if you support civil war criminals unless you are a hypocrite.

Plurality and democracy will rule. A concept foreign to Hizbbollah and its duped followers. History full of Saddam and Ghadafi 99% support, a fake support that disappeared they day they fall. Hizbollah has a mile-wide support but only an inch deep. It will certainly crack as Saddam/Kadafi, but hopefully while Lebanon still exist!

Lebanon was the most democratic and free nation in the Middle East. Its freedom was abused by militant Palestinians, Syrians, Israelis and now Iranians. Peaceful Cedar Revolution inspired Arab Spring and Iran’s Green Revolution. Lebanon with its democracy, education, international connections and innovative spirit should be the Singapore of the region & most stable and secure Arab country. Three factors destroyed our foundation and allowed outside interference:
1. Hizbollah or Iran’s foreign Legion occupation and indoctrination of a community
2. SSNP and all politicians working for Syria’s interests
3. Aoun/Bassil and their duped supporters who sold our freedom and democracy to highest bidder and weakened Lebanon, Christians and democracy.
These three factors (traitors) are what bleeding Lebanon, implying a failed state, and inviting external interferences. If we get rid of them Lebanon will be once again be the most stable, democratic and prosperous nation in the region.

You are delusional. The cedar revolution did not inspire the arab spring. It was inspored by the TUNISIANS. The iranians could care less about what lebanese do. They don't look at lebanese for inspiration. Get a grip of reality.

If only Shia who voted for duo ask themselves one question: "Would they be happy emigrating and living in Iran", they would understand to what extent they were duped by Hizbollah and realize Iran's Basij created Hizbollah to prevent Lebanese Shia democracy (what Green Revolution was all about) from reaching Iran. The answer to the question is obvious as we don't see crowds waiting at Iran embassy for visas, alse evident by number of Lebanese who voted in Iran. Wake up before it is too late and rediscover the essence of Lebanon and how Hizbollah is making us strangers into our own land and culture.

Or they could ask themselves if they would be happy living under Geageas rapist militia? You can't preach wmto others while you support civil war criminals.

Gebran sons. Personally I gave up. Berri created a following of 500k shia followers ( 100k followers that he employed in the public sector uselessly times 5- their family members).
These 500000 shia followers will aleays vote for the shia duo who will ALWAYS drag Lebanon down. The only solution is partition. Democratic Lebanon will fail. Even if the cost is civil war, parrition is the only way. Not decentralization. Not dialogue. Not living with this 500000shia voters is the only way to go forward.

Same reasoning apply to Aoun/Bassil's support. If you exclude those appointed by them, those benefiting from his ministries' contracts, those on payroll supported and armed by Hizb, those in OTV, etc, the emperor will be left with no cloth! This in addition to nepotism is sadly the worst form of corruption and I'm surprise Bassil and Aoun as well as all the political mafia are not rotting in prison.

Article 24 of your (?) Constitution gives half of your (?) parliament to the Christians (?) who are about a quarter of your population. Down from the 6:5 advantage of your (?) previous arrangement.
Biden and Macron will reportedly discuss a triumphant return of the two imperial nations to Vietnam and Lebanon.

Noam Chomsky says that more than half of Lebanese are Shias.

Naom Shomsky can stuff both ben gourion and khanenei where the sun doesnt shine. He might be your guru, but he is a nobody

You can tell all that from my name.

You can support your, quarter of your population, statement of course.