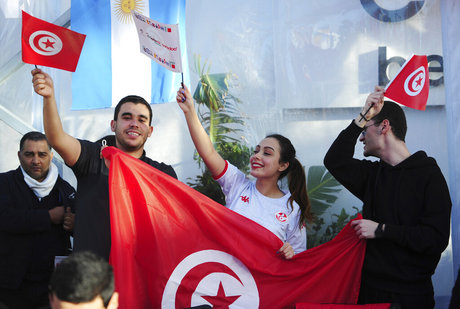 Argentina star Lionel Messi was the butt of region-wide jokes after his team's shock 2-1 defeat by Saudi Arabia last week.

"We got humiliated. They ridiculed us and demolished us without mercy. I never imagined this could happen."

And along with the satire came farce, in a widely shared clip showing a group of Saudi fans celebrating Dawsari's stunning goal that secured the Green Falcons' victory.

One fan got so excited he ran out of the room, tore the metal door off its hinges and threw it in the yard.

While Argentina's fortunes later turned with emphatic victories over Mexico and Poland, the four Arab teams in the tournament have had mixed results.

Tunisia, in a tough group including title-holder France, had few reasons to celebrate, and its fans turned to self-deprecating humor even before the tournament started.

One group of Tunisians shared a video of themselves in traditional Sufi clothes singing a sad, religious-style funeral chorus.

"Nil would be okay against these unbeatable teams," the lyrics go.

"I have so many woes, but I hope (Tunisian player) Msakni is on form".

Another one posted a video blog begging France star Kylian Mbappe not to play against Tunisia in Wednesday's match.

Mbappe took to the field for only part of the match, which ended in a shock 1-0 Tunisia victory. After earlier defeats, though, it wasn't enough for them to advance to the next round.

Host Qatar, widely accused of corruption and rights abuses around the tournament, has also suffered repeated losses on the pitch.

After it became the first World Cup host to lose the opening match, against Ecuador, one Facebook user parodied a fact-checking service: "Not true: Qatar did not buy the match."

Another meme featured an idle goalkeeper smoking a shisha pipe in front of the goal, with the caption "Ecuador's keeper".

The satire has not been limited to events on the pitch.

One video takes a clip of Fares herself saying, "As soon as I heard the first little section, 'tukoh tukoh taka tukoh', I said: that's the song!"

The video then cuts to an actor from an old television series.

One meme shows a group labelled "foreigners" dancing to "Tukoh Taka", while next to them "Arabs" listen in disgust.

Other posts have touched on sensitive social issues, in a region where many young people struggle to find work and financial security.

"People will do anything to get a (World Cup) ticket," one woman said in a video post. "But money for a dowry? No way."

Regional politics are, of course, ever present.

One Lebanese meme joked that Iran's match against the United States on Tuesday would be "the first time they play outside Lebanon", referring to the country's long history as a stage for proxy wars.

And after England's blistering 6-2 victory over Iran last week, one meme quoted a supposed security source echoing a formula much-used in statements by Iranian authorities: "We will respond to the six goals at the appropriate time and in the appropriate place."