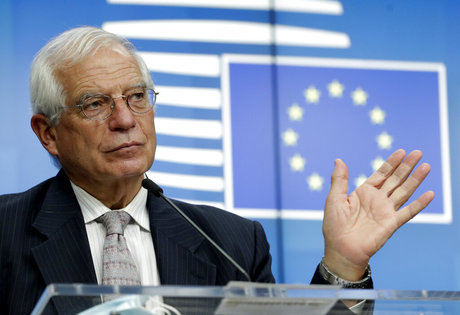 EU foreign policy chief Josep Borrell said at regional security talks Thursday that he planned to discuss with his counterparts any available legal means to ensure that Russia pay for the reconstruction of war-torn Ukraine.

Borrell spoke at the start of this year's two-day ministerial conference of the Organization for Security and Co-operation in Europe (OSCE) in the central Polish city of Lodz.

"I will meet with my colleague foreign ministers today... We will explore all legal possibilities to make sure that Russia will pay for the destruction it's causing in Ukraine," Borrell told reporters.

He recalled that the EU has frozen Russian assets worth nearly 20 billion euros since Moscow invaded Ukraine, and that Western sanctions have also led to the freezing of 300 billion euros of Central Bank of Russia foreign exchange reserves around the world.

"These reserves are blocked. But from being blocked to being seized is a strong difference," Borrell said.

"And there are legal procedures that have to be studied. But our proposal is on the table... Russia has to pay for the reconstruction of Ukraine."

Poland is hosting this year's ministerial conference as the country currently holds the rotating chairmanship of the OSCE, whose members include both Russia and Ukraine.

Warsaw refused to allow Russian Foreign Minister Sergei Lavrov, under European sanctions, into Poland for the conference, triggering an angry response from Moscow.

Russia's delegation at the conference is instead being led by its permanent representative to the OSCE Alexander Lukashevich.

"The West is doing exactly what the OSCE was created to counter –- it is creating dividing lines," Lavrov told reporters on Thursday.

He added that "our Polish neighbors have been diligently digging the grave for this organization all year, destroying the remnants of the culture of consensus."

Polish Foreign Minister Zbigniew Rau denied the "outrageous" accusations, telling the Lodz conference that "it was Russia that rejected the renewed European security dialogue" in February and had since blocked several OSCE decisions.

Also present in Lodz, senior US diplomat Victoria Nuland said she was "optimistic about the future of the OSCE".

"Just as he has failed to defeat Ukraine... (Russian President Vladimir) Putin has also failed in his effort to divide or destroy the OSCE," Nuland, the undersecretary of state for political affairs, told reporters.

The OSCE was founded in 1975 -- at the height of the Cold War -- to foster relations between the Western and Eastern blocs.

It currently has 57 member states, including NATO countries and allies of Moscow.