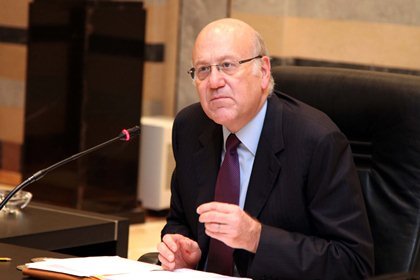 Caretaker Prime Minister Najib Mikati on Friday officially invited ministers to hold a session for the caretaker cabinet at 11am Monday.

“There is some sort of a tacit agreement between Mikati, the Shiite Duo and the parties represented in the government – except for the Free Patriotic Movement -- that no cabinet sessions shall be held unless it is extremely necessary, and this is what the current situation has actually reached,” sources close to Mikati had told al-Joumhouria newspaper.

The session will have "an emergency agenda, topped by the hospitalization situations, in terms of… implementing the fee increases stipulated in the state budget, seeing as the Finance Ministry has said that it will not be able to dispense these overdue payments without a decree,” the sources added.

The agenda will meanwhile be “non-controversial” so that the political parties can agree on, the sources went on to say.

Noting that the call for the session “will be embarrassing to the Free Patriotic Movement’s ministers before anyone else,” the sources revealed that some of these ministers “have acknowledged the necessity to hold sessions, especially that the agenda is related to people’s security.”