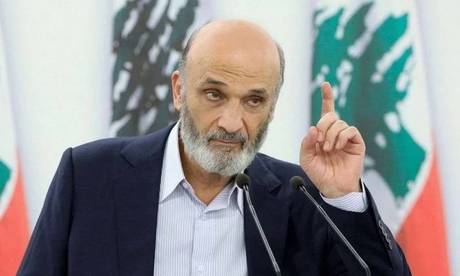 Lebanese Forces leader Samir Geagea has called Parliament Speaker Nabih Berri to ask the blocs who are hindering the presidential election to stop the obstruction, before Thursday's session.

"From now on we cannot tolerate any more delays," Geagea said.

He added that exiting the session before the second round is no longer an acquired right, accusing "the Axis of Defiance" of making of it a habit that has persisted for three months and for eight sessions.

LF lawmaker Antoine Habchi had said Thursday, before an eighth session that failed to elect a new president, that Parliament is "not shouldering its responsibilities", which upset Berri.

In all eight sessions, pro-Hezbollah lawmakers would leave the session before the second round, causing an intentional lack of quorum.

In the first round, they would cast blank ballots, which is also criticized by their opponents who accuse them of obstruction and ask them to name their candidate.

Hezbollah and its allies still haven't agreed on a name for the next president and are calling for consultations, dialogue, and a consensual president. They consider that naming a candidate who cannot become a president is a waste of time and "will not lead to any results."

But it's Berri's bloc that's responsible for obstructing the election sessions, they and their allies are always first out the door following the fist vote.

Geagea is delusional trying to reason with Nabih Berri.

The way things are "progressing" there is not going to be a President of the Republic of Lebanon for years to come.