Qassem: We won't agree to a president who would stir strife 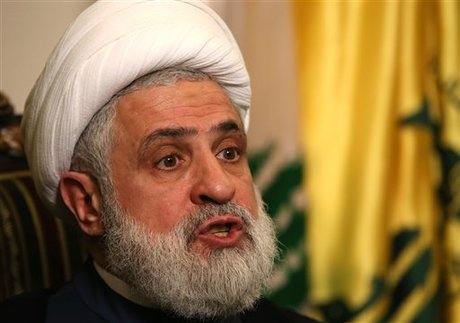 Hezbollah deputy chief Sheikh Naim Qassem on Friday stressed that the country’s next president must have two main concerns: “rescuing the country economically and cooperation with all parties.”

“As for the controversial political issues, they should be referred to a calm dialogue, including the defense strategy,” Qassem tweeted.

He added: “We will not agree to a president who would stir strife and who wouldn’t appreciate the blessing of liberation and the martyrs’ blood.”

We will not agree to a president who would “serve the American-Israeli scheme,” Hezbollah number two emphasized.

“Say what you want about us but we will not surrender Lebanon to the foreigners,” Qassem went on to say.

Hezballah have surrendered Lebanon to the foreigners long ago. In fact it's the basis for it's very existence, it's raison d'etre. Their master Khamenei even boasts about this when he says that Lebanon is part of "the Islamic Republic’s strategic depth". Nasrallah has pledged multiple times Hezballah's blind loyalty to the Islamic Republic of Iran and it's supreme leader not only in the the matter of religion but in all other matters as well. Qassem himself describes how Hezballah needed to send a delegation to Iran to get their approval on if the Hezb can run candidates in the 1992 Lebanese parliamentary elections.

Qassem: We won't agree to a president who would stir strife

why not you insisted on it the last time!