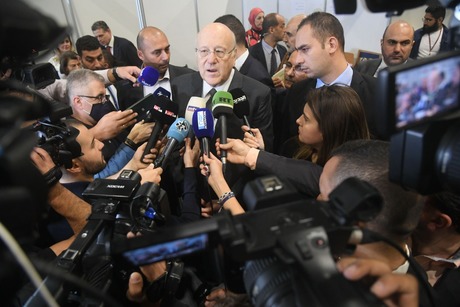 Caretaker Prime Minister Najib Mikati on Saturday defended his call for a cabinet session on Monday -- the first to be held amid a presidential vacuum that followed the end of Michel Aoun’s six-year term.

“We will only approve the matters that we and the ministers believe are necessary,” Mikati said after his inauguration of the Beirut International and Arab Book Fair 2022.

He added that the session’s main objective is approving a decree related to dialysis and cancer patients.

Dismissing accusations suggesting that his cabinet is “dismembered,” Mikati stressed that the government is “complete” and “what it is doing is acting in caretaker capacity with the aim of serving the citizen.”

“Whoever has an alternative should come forward,” he added.

“I’m carrying out my full duty by calling for the session, and based on my relation with the ministers throughout the past period, they enjoy the same patriotic sense and mayve more, that’s why I believe that there will be broad participation,” Mikati went on to say.

Lamenting that some are depicting his call for the session as being “sectarian” or “targeted against a certain group,” Mikati underlined that “offerings and assistance do not discriminate between a patient and another.”

Told that some are accusing him of being “the Shiite Duo’s ruler,” Mikati said “let him remember how much he flexed his muscles when the Shiite Duo was supportive of him,” in reference to Free Patriotic Movement chief Jebran Bassil.

Mikati's decision to convene cabinet has reignited his standoff with the FPM, which refuses that any session be held amid the ongoing presidential vacuum.

In a statement, the FPM has warned that such a session would “violate the constitution,” stressing that it will not “bow to any blackmail.”

And in a tweet overnight, FPM MP Ghassan Atallah warned that "Mikati's violation of all norms and constitutions and the attempt to challenge a main party are rejected and shall not pass."