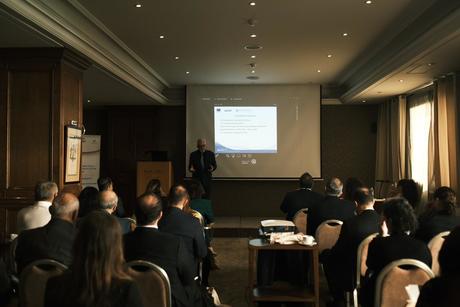 The closing ceremony of the Technical Assistance Facility for the Lebanese Private Sector (EU-TAF) project in Lebanon funded by the European Union and implemented by DAI was held on December 1.

The ceremony took place in the presence of Alessia Squarcella, Deputy Head of Cooperation, EU Delegation to Lebanon, European Commission and Sinisa Djuric, DAI Project Director along with more than 20 companies in the agri-food, creative ICT and healthcare sectors who benefitted from the 34-month support program to realize their commercial potential.

Launched in February 2020, the EU-TAF initiative came at a critical juncture in Lebanon’s history, as it began struggling with one of the world’s worst economic and social crisis in 150 years.

Developing the productive sectors is crucial to support the country’s early recovery and future sustainable growth, and will contribute to create job opportunities, especially for women and youth in disadvantaged areas.

“The private sector has an important role to play, namely advocating for reforms and engaging in public-private dialogue with decision makers, but also by being ready to abide to the reforms, for the benefit of the entire country. Lebanon cannot wait," Squarcella said.

"Delivered through a systematic, strategic support process, by excellent local and international experts, the companies were assisted in building local and international competitiveness, and market development through innovation, enhanced processes, improved quality, and productivity, in all elements of their value chains. This included such areas as market profiling, & validation, operations, compliance & standards, distribution & channel partners, strategy, international, exports market & action planning in and their implementation," a press release said.

“The EU-TAF wasn’t one the largest DAI’s projects in terms of the volume, but we believe it is one of the most impactful and important ones as it is seen as being an exemplar for how private sector development support could be implemented in future,” Siniša Djurić, EU-TAF project Director, said.

19 participant companies have, through the project, developed new products and 9 of them are already in export markets and, in November 2022, 13 companies traveled to their respective target markets, namely, France, Spain, Netherlands, Belgium, Germany, Turkey, & the UAE, after buyers saw potential in their products and accepted to meet with them.

"Lebanon’s Manufacturing and ICT Creative sectors represent the best opportunity for its future wealth, increased local economy value add and job creation, to overcome the current economic crisis and enable the building of a viable defensible position within the global cohort of developing, growth countries," the press release added.

“Today, it is the private sector in Lebanon that is holding the country together. We need regulatory reforms to strengthen the industry and attract the talented Lebanese individuals who left the country, giving them incentive to come back," said Sleiman El Haddad, Head of Administration Division at Crown Flour Mills.

The event concluded with the closing remarks of Declan Gordon Carroll, EU-TAF project Team leader, who reminded that the EU-TAF was a project which set out to create an "exemplary approach" for how private sector development (PSD), in Lebanon, can be better supported.

"It highlighted the need, not only for financial resources, but access to, world class commercial expertise, strategically, and operationally," the press release said.

"We hope that such services and expertise become a prime of intervention of future government and donor initiatives to support," it added.