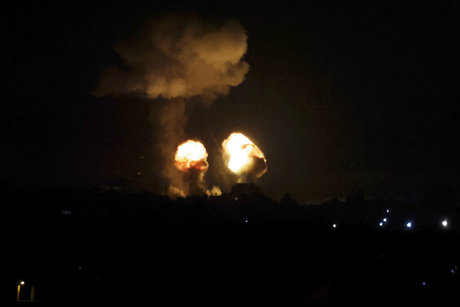 The Israeli air force said it had carried out overnight air strikes against sites of the Islamist movement Hamas in the Gaza Strip after a rocket was fired from the Palestinian enclave towards Israeli territory.

The Israeli army reported on Saturday evening a rocket had been fired from the Gaza Strip towards Israel, the first in a month.

The attack came as one of Gaza's larger armed factions, Islamic Jihad, threatened to retaliate after Israeli troops killed two of its leaders in the West Bank town of Jenin on Thursday.

"In response to the rocket fired toward Israeli territory, IDF fighter jets targeted overnight (Sunday) a weapons manufacturing site belonging to the Hamas terrorist organization," the Israeli army said in a statement.

The target was a site "where the majority of the organization's rockets in the Gaza Strip are being manufactured", it said.

The army said a few hours later it had targeted a Hamas military post in response to fire from the Gaza Strip against Israeli warplanes.

The armed wing of Hamas said it used anti-aircraft missiles during Israeli air strikes on the Gaza Strip.

Security sources in Gaza reported two strikes in the south of the enclave, one against a military training site in Khan Younis and the other in an uninhabited area close to Rafah.

The strikes caused no injuries, according to Palestinian medical sources.

"The Zionist enemy is extending its aggression against our people by brutally bombarding the Gaza Strip, following its crime yesterday of executing the martyr Ammar Mufleh in Huwara," Hamas spokesman Hazem Qassem said.

A surge in bloodshed in the occupied West Bank has sparked international criticism of the Israeli army for its use of lethal force against Palestinian civilians.

Criticism has focused on the killing of Ammar Hadi Mufleh, 22, in disputed circumstances in the West Bank town of Huwara, just south of Nablus, on Friday.

At least 145 Palestinians and 26 Israelis have been killed in violence in Israel and the West Bank, including annexed east Jerusalem, this year, the heaviest toll since 2015.

In August, at least 49 Palestinians, including combatants but also civilians, were killed in three days of fighting between Israel and Palestinian militants in Gaza, which has been under Israeli blockade since 2007.

Where are Washington’s, Paris’ and Berlin’s weapons for the Palestinians? They need howitzers, Patriot missiles and many many millions of mortar rounds to repel the Zionist invaders and occupiers of falasteen.