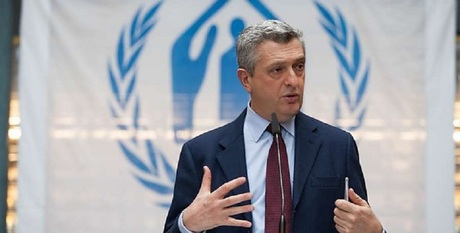 "We must stand with Lebanon," UNHCR chief Filippo Grandi said at the end of a three-day visit to Beirut.

He urged the international community to help the country as it faces "one of its hardest moments" and hosts "one of the largest refugee populations per capita in the world."

Since late 2019, Lebanon has been in the throes of an economic crisis dubbed by the World Bank as one of the worst in modern history, dealing an especially heavy blow to vulnerable communities, including refugees.

Hundreds of thousands of Syrians fled to Lebanon after the country's civil war began in 2011 with the brutal suppression of anti-regime protests.

Authorities say Lebanon hosts around two million Syrian refugees, while nearly 830,000 are registered with the U.N.

In a statement, Grandi said sustained support for Lebanon was needed "now more than ever... both to support Lebanese in need and the hundreds of thousands of refugees that they have generously hosted for so many years."

During his visit, Grandi met with officials including caretaker Prime Minister Najib Mikati "to discuss how to better support vulnerable Lebanese and refugees," the statement added.

Lebanese authorities have long pushed for Syrian refugees to return to their home country, and have made several repatriation efforts they describe as voluntary, but human rights groups have branded the returns as forced.

"The government reiterated its urgent appeal for an end to the refugee crisis," Grandi said, adding that UNHCR was working towards this goal "despite the complex and challenging situation."

Since the Damascus regime regained control of most of Syria, some host countries have sought to expel refugees from their territories, citing a relative end to hostilities.

But rights groups say some refugees have faced prosecution, and reject the idea that refugee returns to Syria are safe.