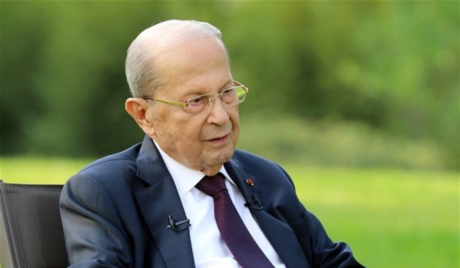 Ex-president Michel Aoun on Sunday said that caretaker PM Najib Mikati's call for a cabinet session has "unveiled the real reasons that made him, throughout five consecutive months, refrain from forming a government."

It was his "attempt to monopolize power and impose his will on the Lebanese contrary to the stipulations of the constitution, norms and the National Pact," Aoun added, in a statement distributed by his press office.

"His unjustifiable move plunges the country into a precedent that the Lebanese national life has never witnessed, with what it carries of repercussions on political stability in the country,” the ex-president said.

He accordingly called on ministers to “take a unified stance that would prevent the violation of the constitution’s stipulations, which clearly define the role of caretaker cabinets, because any (partisan) interpretation in this regard would be a blatant breach of the constant principles that were established by the National Accord Document (Taif Agreement) and enshrined in the constitution’s articles.”

Mikati has argued that the caretaker cabinet needs to approve urgent matters, including a decree related to medical services offered to cancer and dialysis patients.

Aoun’s Free Patriotic Movement has meanwhile repeatedly warned against holding cabinet sessions amid the ongoing presidential vacuum, labeling such a move as an attack on the president’s powers.

LOL, no one weakened Christians more than Aoun and Bassil. Christians in Lebanon were historically the protectors of democracy, freedom, enlightenment, tolerance, human rights and rules of law. Aoun sold all these principles for 30 pieces of silver to become president, weakening Christians in every step. No greater crime than providing Christian cover to criminal Hizbollah, Iran foreign legion, that stands for opposite to what Christians believe in. Hizbollah is poisoning Lebanon and moving us by force away from democracy into Basij land thanks to Aoun/Bassil. Aoun is a curse to Christians as Hizb is a curse to Shia.

President Aoun is the promoter of democracy! Went into two wars that killed thousands and pushed thousands into immigration just to promote himself as a representative of freedom!
Stupid and ignorant is the one that still follows him and his FPM.