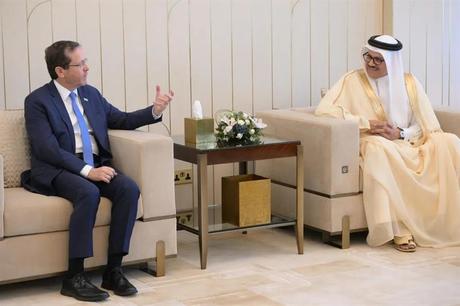 Israeli President Isaac Herzog arrived Sunday in Bahrain, the first visit by an Israeli head of state to the small Gulf kingdom since the two countries normalized relations in 2020.

Herzog, whose role is largely ceremonial, was greeted at the airport by Bahraini Foreign Minister Abdullatif al-Zayani, according to pictures posted to his Twitter account.

He said on Twitter he planned to meet King Hamad bin Isa Al-Khalifa, as well as Sheikh Salman bin Hamad Al-Khalifa, who is crown prince and prime minister.

Accompanied by an economic delegation, Herzog said he would discuss "ways to strengthen our economic cooperation" along with climate change and security issues.

Herzog said he would then travel to Abu Dhabi, capital of the United Arab Emirates.

In 2020, the UAE, Bahrain and Morocco became the first Arab states in decades to normalise relations with Israel, following negotiations spearheaded by the administration of former U.S. president Donald Trump.

"I call on more states in our region to join this partnership, strengthening the Middle East," Herzog tweeted on Sunday.

"The expanding circle of (Middle East) peace is highly important, especially amid threats to global and regional stability. In the face of hate, threats & terror, there is one answer: alliances with friends."

In February of this year, Israel signed a defense agreement with Bahrain and Naftali Bennett became the first Israeli premier to visit the country.

See what can be done when the rulers of a country decide to take their heads out of the sand and drive towards a total Middle East peace.

Be a good example then and give back the land you stole. Or at the very least start by appologizing and getting the hell out of the westbank, east Jerusalem, the Golan, leaving Gaza alone and allowing the refugees and their descendands to return to their land. You refuse any form of justice therefore everytime you use the word peace it is done in falsehood. Nonetheless, the justice of God will catch up with you in due time. The actions of the state of israel are enough to cause the wrath of God even according to the teachings of the torah.

Perhaps it will do exactly that, the day after the USA and Canada give their lands back to the First Nations, when all the countries of South America give their lands back to the original inhabitants, the Australians return their lands to the Aborigines, the New Zealanders back to the Maoris. Need I go on?
By the way, if you read in your Bible you will find that the Jews have lived in the Holy Land for over 5700 years, that there was a certain Jew, born in Bethlehem just over 2000 years ago, who lived and died in Jerusalem. Not to mention the Al-Aksa Mosque which was built only 1600 years ago on the ruins of Jewish Temples in the middle of Jerusalem. So who lived there first?

Shameless creature. You came to live on stolen land claiming ypur ancestors lived there thousands of years ago but refuse to let Palestinians return after only 70 years. What a hypocrite. You didnt have a problem stealing the land without waiting for the US to give the land back to the natives but now you use it as an excuse. And who were those jews that lived there? They are not you nor your ancestors. Palestine was inhabited by various different people, not just the ancient hebrews. The ancient hebrews did not even come to an empty land nor did they live there alone nor did they stay for thousands of years. They came from UR (Iraq).

The Palestinians are the descendends of those various people that lived there, especially the canaanites and the philistines from whom they got their name. You polish, russian, ethiopian and other recent immigrants don't have any valid claim to palestine. Its like a bosnian muslim claiming a right to spain because muslims ruled it a long time ago. But you already know all of this, you are just doing your hasbara as usual. Does the God of torah allow homosexual bars and clubs like the state of israel does? Does he allow fornication? Doe she allow nudity, porn, usary and all the other torah-sins israel has legalized? Keep up your hypocrisy tho, God know very well how to deal with your kind.