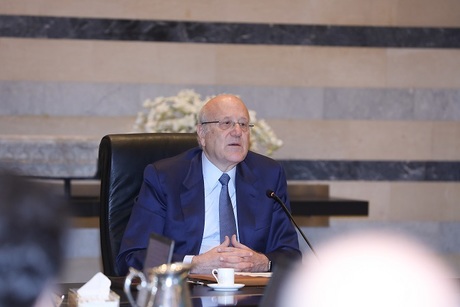 Caretaker Prime Minister Najib Mikati on Monday strongly defended a cabinet meeting boycotted by the Free Patriotic Movement and suggested that the FPM does not care about the “death” of cancer and dialysis patients.

“The session that we are holding today is extraordinary par excellence and the most urgent thing in it is the medical file, which necessitated it, and it is related to the rights of cancer and dialysis patients,” Mikati said at the beginning of the session at the Grand Serail.

“If it wasn’t for this file, we would not have called for this session, but if some are taking the constitution and coexistence as an excuse, we tell them that they cannot be achieved through the people’s death, and in any case this will not take place at our hands,” the caretaker PM added.

“Today we have reached a point at which we are no longer capable to spend on cancer and dialysis patients, so do some want us to commit a mass crime against them? If this is what’s needed, then let’s refrain from shouldering responsibility and let every party bear the responsibility for its actions and their repercussions,” Mikati went on to say.

Addressing all Lebanese and all spiritual, parliamentary, political and social leaders, Mikati added: “If they want the country to fully collapse, I’m not pleased with this mission in which I receive hundreds of requests while being unable of fulfilling them.”

He added: “We will carry on with shouldering our responsibilities no matter the difficulties and I reiterate the call for speeding up the process of electing a president.”

The FPM has repeatedly warned against holding cabinet sessions amid the ongoing presidential vacuum, labeling such a move as an attack on the president’s powers.

This is like watching two monkey flinging poop at each others.

"the constitution and coexistence" He acknowledges the threat of Lebanese Christians to bring NATO to conquer if Christians lose their privileged status under the Constitution: half of parliament for a group numbering perhaps a quarter of the population. But why is there any set-aside at all? This is coexistence?

Who is in the new Lebanese Cabinet? - The National
https://www.thenationalnews.com › mena › 2021/09/10
Sep 10, 2021 — Industry Minister: George Boujikian. Chosen by: Armenian political party Tashnag. Born in 1965 in the city of Zahle, Mr Boujikian is a .....
So natour points out that there are only four real honest truly faithful Lebanese Christians in the whole world, three of whom live in Miami.

The poop flingers are Mikati and the FPM. Join them you look the part.

So who's your Christian political party?

I don't have one. But if you think I should have a Christian political party which one do you suggest I follow?