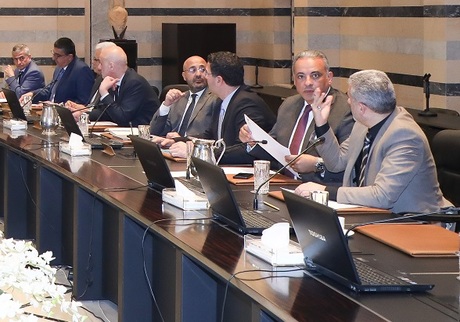 Two Hezbollah ministers on Monday defended their participation in a caretaker cabinet session boycotted by the ministers of the Free Patriotic Movement and ex-president Michel Aoun.

“We are keen on the constitution and all its details, because it is the regulator of the lives of the Lebanese, and on the other hand we address the people’s interests,” caretaker Labor Minister Mustafa Bayram said after the session.

“Our call for the election of a president who would reflect the aspirations of the Lebanese is constant, and the government is meanwhile concerned with acting in caretaker capacity. Accordingly, we respect those who attended and those who boycotted but in the first place the constitution should have been respect,” Bayram added.

“We call for dialogue for resolving all matters,” the minister went on to say.

“The situation is extraordinary and a prior discussion took place over the agenda, which was exclusively limited to the urgent matters,” Bayram added.

Caretaker Public Works Minister Ali Hamiyeh for his part said “people’s pain” was what brought Hezbollah’s ministers to the session.

“We rejected the items related to VAT and the new customs tariff and we added urgent items to the session,” Hamiyeh added.

Caretaker PM Najib Mikati had argued that the caretaker cabinet needs to approve urgent matters, including a decree related to medical services offered to cancer and dialysis patients.

The FPM has meanwhile repeatedly warned against holding cabinet sessions amid the ongoing presidential vacuum, labeling such a move as an attack on the president’s powers.

Nobody is more keen on 'people's pain' than Hezbollah, it's even offering masterclasses on Tatbir free to all Lebanese people.

Caretaker Labor Minister Mustafa Bayram in particular mentioned Article 24 of the Lebanese Constitution which reserves half of legislative seats to Christians. Bayram told reporters, "Frankly, I just don't trust Muslims to vote."
Actually, Hezbullah believes that if democracy came to any middle-eastern/southwestern-Asian country, NATO would get up off its death bed to invade. I urge Hezbullah to read the news a bit more carefully. I don't think NATO is getting up off its death bed. (Tatbir is ritual blood-letting practiced by some Shias, apparently.)

Who used terrorism to reverse the vote Shias in Iraq?

What are you saying?