LGBTQ people in Lebanon: There’s no protection, but there’s existence 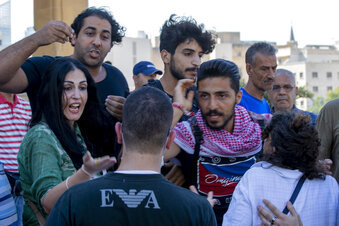 Throughout the Muslim and Arab worlds, either government neglect or outright hostility toward LGBTQ people, said Rasha Younes, a senior researcher with Human Rights Watch who investigates anti-LGBTQ abuses in the Middle East and North Africa.

In some countries, apparent advances for LGBTQ people have been followed by pushbacks. Lebanon is an example. Over recent years, its LGBTQ community was widely seen as the most vibrant and visible in the Arab world, with advocacy for greater rights by some groups, and gay bars hosting events such as drag shows.

Yet many in the community have been reeling from a wave of hostility this year that included an Interior Ministry ban on events described as aiming to promote “sexual perversion.”

Online, some people have railed against Pride events, at times citing religious beliefs, both Muslim and Christian, to denounce LGBTQ activism. Someone posted an image of a knife slicing through a rainbow flag.

At one point, security force members showed up at the Beirut office of the LGBTQ-rights organization Helem, executive director Tarek Zeidan said.

Some LGBTQ activists called for a protest, distributing an invitation that said, “We will continue to love and to live as we wish.” But the demonstration was postponed, with organizers citing safety concerns.

The crackdown has rattled LGBTQ people already straining due to Lebanon’s economic crises, which activists say have disproportionately fueled unemployment and homelessness in vulnerable groups.

In November, activist groups reported with relief that the Interior Ministry’s ban on LGBTQ events had been suspended.

“There is a space. We have organizations. Nightlife exists,” Mandour said. “But it’s always under negotiation, where and when. There’s no protection, but there’s existence.”

In Turkey, which is overwhelmingly Muslim, President Recep Tayyip Erdogan’s government has shown increasing intolerance toward any expression of LGBTQ rights, banning Pride marches and suppressing the display of rainbow symbols.

Among Arab nations, most explicitly outlaw gay sex, including Qatar. It has faced intense international scrutiny and criticism before and during the World Cup over rights issues, including questions on whether LGBTQ visitors would feel safe and welcome.

Looking ahead, leading LGBTQ-rights advocates salute the courage of activists trying to operate publicly in countries such as Lebanon and Tunisia. But they are not optimistic about major LGBTQ advances any time soon in most of the Arab and Muslim worlds.

“In many countries, where civil society is not allowed, where there’s complete lack of rights and free association, activism cannot be viewed in the public realm,” Younes said. “People cannot protest or express support online for LGBTQ rights, so there’s total repression of LGBTQ rights.”

“You can’t just talk about LGBTQ rights if the straight people are oppressed, if the women have no rights,” he said. “The discourse should be about bodily autonomy — the right over your body and decisions over your sexual rights, not specific to men, women, gay, straight."

LGBTQI+ is a cult…. It’s one thing to tolerate this but it’s another one to promote it. Promoting it should be punished across the globe. I have gay friends, I have 2 lesbians in my family but it won’t change a thing.