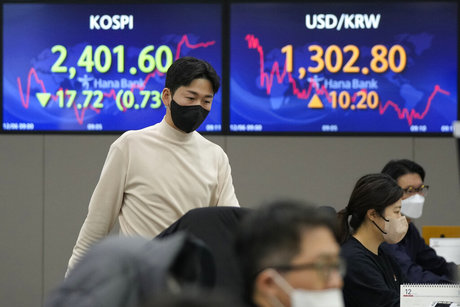 The ratings agency's Global Economic Outlook report estimated global growth at 1.4% in 2023, revised down from 1.7% in its September forecast. It put U.S. growth in 2023 at 0.2%, down from 0.5%, as the pace of monetary policy tightening increases.

Markets have been lifted by expectations China will press ahead with easing its stringent pandemic restrictions, relieving pressures on trade, manufacturing and consumer spending.

Shares fell in Bangkok and Taiwan.

Investors have been hoping the Fed might slow the pace of its interest rate hikes aimed at curbing stubbornly high inflation.

The services sector, which makes up the biggest part of the U.S. economy, showed surprising growth in November, the Institute for Supply Management reported Monday. Business orders at U.S. factories and orders for durable goods in October also rose more than expected.

That news is positive for the broader economy, but it complicates the Fed's fight against inflation because it likely means the central bank will have to keep raising interest rates to bring down price pressures.

"Inflation will likely prove to be stickier and with the service part of the economy refusing to weaken. The risks that the Fed might need to do more remain elevated," Edward Moya of Oanda said in a statement.

The Fed is meeting next week and is expected to raise interest rates by a half-percentage point, which would mark an easing of sorts from a steady stream of three-quarters of a percentage point rate increases. It has raised its benchmark rate six times since March, driving it to a range of 3.75% to 4%, the highest in 15 years. Wall Street expects the benchmark rate to reach a peak range of 5% to 5.25% by the middle of 2023.

The aim is to cool growth without slamming on the brakes and causing a recession that would cascade through the global economy, slowing trade and consumer spending .

A weekly update on U.S. unemployment claims is due Thursday and November's monthly report on producer prices will be released on Friday.

In other trading Tuesday, U.S. benchmark crude oil lost 84 cents to $76.09 per barrel in electronic trading on the New York Mercantile Exchange. It lost $3.05 to $76.93 per barrel on Monday.

Brent crude, the pricing basis for international trading, shed 89 cents to $81.79 per barrel.