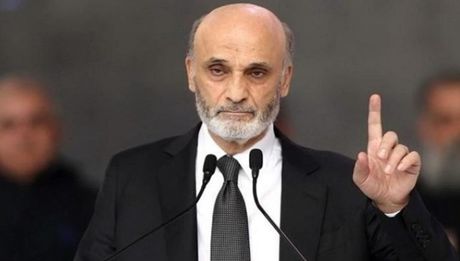 Lebanese Forces leader Samir Geagea said Thursday that any presidential candidate backed by Hezbollah would lead to "a further collapse."

He accused again Hezbollah and its allies of obstructing the election of a new president.

"They are obstructing (the election sessions) until the situation worsens in the country, to pressure us to accept their candidate as a better option than vacuum," Geagea said of Hezbollah. "This is unfortunately their logic."

He added that his party will never accept Hezbollah's candidate.

"We have learned from the last time we agreed on the name of General Michel Aoun that any Hezbollah candidate will lead the country to more deterioration, calamities and tragedies," Geagea said. "We will never do it again."

He’s doing the finger thing like his royal highness lord Hassan and the king’s buffoon his royal shortness lord Jebran.

pris1, it's normal for a doctor to check out those areas, you don't really need to be a proctologist you know...

This is first step. Next step to save Lebanon is for diaspora to form a sovereign group and a lobby organization clearly state it won't accept any arms outside army and not a single Iranian rocket remaining on Lebanese soil. This should follow by Cedar Revolution II million plus march to tell Macron, Biden, the pope and the world that we are able and deserving independence and democracy and will resist occupation with every mean as any respectable nation would. If that happens, Lebanon recovery will be fastest in history!