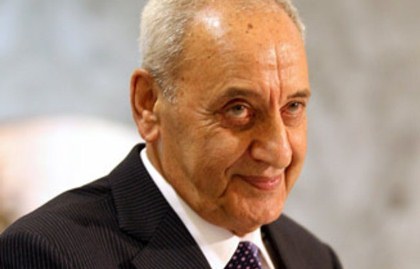 Parliament Speaker Nabih Berri announced Thursday that he would turn next week’s presidential election session into a parliamentary dialogue if the blocs agree to such a move.

“I will explore the opinion of all colleagues and parliamentary blocs regarding the issue of dialogue. If it turns out to be positive, I will turn next Thursday’s session into a dialogue session in parliament,” Berri said.

Lebanon's divided parliament had earlier in the day failed to elect a new president for a ninth time.

Parliament is split between supporters of the powerful Iran-backed Hezbollah and its opponents, neither of whom have a clear majority.

Hezbollah opponent Michel Mouawad, who is seen as close to the United States, won the support of 39 MPs but fell well short of the required majority.

Mouawad's candidacy is opposed by Hezbollah, whose leader Sayyed Hassan Nasrallah called last month for a president ready to stand up to Washington.

Lebanon can ill afford a prolonged power vacuum as it grapples with a financial crisis dubbed by the World Bank as one of the worst in modern history, with a currency in free fall, severe electricity shortages and soaring poverty rates.

The country's caretaker government has limited powers and cannot enact the sweeping reforms demanded by international lenders to release billions of dollars in bailout loans.

Dialogue about what exactly? They love talks dialogues.

Your job is to cast a vote for a declared presidential candidate and that's it. Tally the votes whomever gets the needed votes is elected 1str round or 2nd round.

actually, please resign and get out of lebanon. he is one of the faces associated with the massive corruption we have, and any calls for dialogue from him mean absolutely nothing.

In nearly all democratic countries in the world, a vote in parliament means exactly that.
You have a vote and only those MP's PRESENT in the Assembly can vote. The result then is whoever has more votes wins. MP's not present don't have a say in the matter.
However, this might actually bring more MP's to attend sessions.
It's about time that Lebanon accepted this simple system.