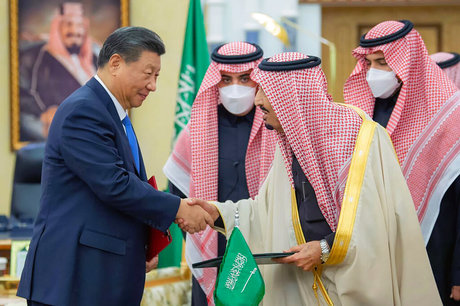 After talks between Chinese President Xi Jinping and King Salman and his 37-year-old son Crown Prince Mohammed bin Salman, China and KSA expressed their keenness on stability and unity in Lebanon.

In a joint statement from Riyadh, they stressed the importance of making the required reforms and holding dialogue and consultations to overcome the crisis in Lebanon.

The two sides also stressed "the importance of stability" in oil markets, and spoke of "focusing on emissions rather than sources" in tackling climate change.

Forty-six agreements and memorandums of understanding were announced on everything from housing to Chinese language teaching, as both sides are seeking economic and strategic benefits by deepening cooperation.

It's possible to imagine the oppressed Shia majorities in southwest Asia being the stumbling block that brings down both Xi and the Gulf kings. I'm pretty sure that China tolerates Xi and his "better than Mao" cult of personality because he is a competent manager. Racism is bad management.