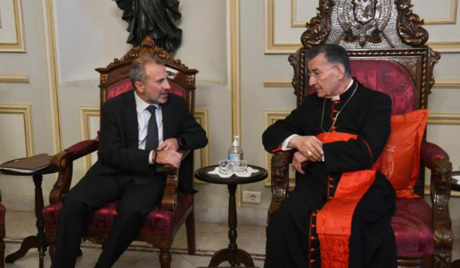 “I continued with Patriarch al-Rahi the discussion of the issue of the presidency and the agreement on a candidate and I call on everyone to agree on a name,” Bassil said after the meeting.

“We discussed carrying out a certain effort to exit the current situation and we are open, but if the others are not showing openness we cannot force them,” Bassil added.

“We will keep trying to find a solution inside and outside the country and I won’t say more than this,” he said.

Asked about the possibility of nominating someone from the FPM for the presidency, Bassil said: “These statements are for entertainment.”

And asked if he would endorse a candidate proposed by al-Rahi, the FPM chief said: “The patriarch does not accept and we do not accept to put him in such a position that would hold him responsible for anything that might happen during the six-year presidential tenure.”

Responding to another question on whether he would propose a Bkirki-sponsored Christian meeting and whether Lebanese Forces leader Samir Gegaea would accept attending the meeting, Bassil said: “Geagea is rejecting everything. He neither wants to come to Bkikri nor to engage in dialogue.”

As for the controversy over the latest caretaker cabinet session, the FPM chief said “what happened in the governmental issue and the issue of decrees was a blow to the entity and the republic, not only to the presidency.”

Asked whether the exchange of tirades between him and Hezbollah has come to an end following the latest statements, Bassil said: “This is up to them, I’m a peaceful man.”