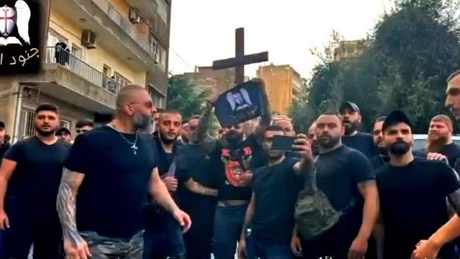 The Internal Security Forces on Thursday denied claims by MP Paula Yacoubian alleging that the newly-formed hardline Christian group Soldiers of God had intervened following an alleged robbery in Ashrafieh.

In a video circulated on social media, Yacoubian had said that a woman in Ashrafieh had called the relevant police station to report a robbery, after which young men from the Soldiers of God group arrived and told her that they had been "informed by the police station" about the incident.

“After the gathering of information and a follow-up, it turned out that no call in this regard had been received by any of the Ashrafieh, Gemmayze or Nahr police stations,” the ISF said in a statement.

“The Beirut Police Operations Room also did not receive any call from a woman in this regard,” the ISF added.

Moreover, it stressed that it has “no relation or contact with the group mentioned by MP Yacoubian,” adding that the issue of the group is being “followed up” by the ISF and that it “rejects any idea based on the principle of vigilante groups.”

And stressing its “commitment to preserving security and order” and “aiding citizens so that they enjoy serenity and safety,” the ISF called on Yacoubian to verify her information with ISF’s officers before making such statements.

Hizbollah can use these images to project to the world that Lebanese Christians also have black shirt militia justifying its own. The same sadistic game after Duo blocked government for 2 years to prevent international court destroying downtown Beirut, Beirut reputation for business and fun, and causing an exodus of people and corporations; they blocked presidential elections for 2 years to elect their puppet Aoun showed that Christians also are to blame in acting like bullies and destroying post-war Lebanon. These Basij are not only changing their community to the worse, but also tricking Christians via their Useful Idiots Aoun, Bassil and Frangie to make the Christian community mirror image of its own, fully corrupt and incompetent, covering for Basij crimes instead of being the guardians of freedom and democracy in Lebanon. Well done Basij!

I don't know about democracy, but I know a bit about law, and Lebanon's basic problem is Article 24 of your Constitution, which reserves half of your parliament to Christians. Imagine if Israel adopts a law that says that all Jewish citizens must act Jewish.

Quite the contrary, Israel has more than one law allowing each religious denomination to practise their religious beliefs as they so wish and in public.

I seems to me that Paula always eager to be in the news reported on something before she thoroughly did her do diligence. As a ex-journalist she should've known belter.

That being said. There's a protracted smear campaign, lead by Al-Akhbar, against Ashrafieh, ever since the neighborhood watch was set up here, trying to lump them together with the so called "Soldiers of God" . Unfortunately this campaign has been somewhat successful in some quarters, mainly in confusing the narrative. While the neighborhood watch are organized young people patrolling their neighborhoods at night after a slew of assaults, robberies and murders, their funding and support is well known; the group calling itself "Soldiers of God" are an ideologically driven fundamentalist Christian organization who, similar to hezballah, claim to get their orders from God. So much has been reported about them non of it thoroughly reached and they seem to have a very active social media presence. We have the "Party of God", the "Martyrs for God", the "Soldiers of God" what next, the "Haberdashers of God" selling God licensed robes, sandals, wings, halos and harps?

"Due" diligence: thanks for the local report. I studied a bit of Arabic: so does this Christian group also call itself Hezbullah: doesn't that mean "army of God"? Wiktionary to the rescue: it's more reliable than Wikipedia generally: "party".

Correct "Due" diligence: Arabic is my native language: so this Christian group calls itself "Jnoud al-Rab" not Hezballah, that mean "Soldiers of God". I have no need for Wiktionary or Wikipedia to rescue me. BTW Hezb means party so Hezb Allah means "Party of God".

Also in the name of accuracy al-Rab ie The Lord at least in Christianity is also used to mean God and Christ as well.

Dude, you still haven't made the update to fimware 3.0? JOKING!

Merry Xmas to you and the readers.

You can update to fimware 3.0? You must be rich! I'm running on coal and steam :). Merry Christmas to your and yours and the Naharnet community.