Macron's reputation on the line with pension reform push 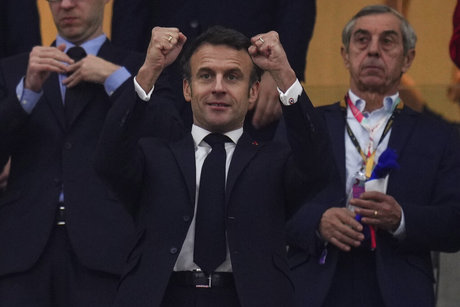 The French government will announce proposals for raising the retirement age and overhauling the pension system on Tuesday, in a potentially explosive reform fraught with danger for President Emmanuel Macron.

Insisting that the French "need to work more", Macron has pushed for the pension system to be streamlined since his rise to power in 2017.

Although he called off his first attempt in 2020 in the face of protests and the Covid-19 pandemic, the 45-year-old centrist put the issue at the heart of last year's successful re-election campaign.

As well as simplifying the system and removing privileges enjoyed by workers in some sectors, the reform would raise the retirement age from 62 -- most likely to 64.

It will also increase the number of years people must have worked to qualify for a full pension.

"On the whole, the idea of the reform is not supported by the public, even though some can understand that if we live for longer then we might need to work for longer," Bruno Cautres, a political expert at Sciences Po university in Paris, told AFP.

In the northeastern city of Lille, 41-year-old Olivier Rohas told AFP that later retirement would "really harm our quality of life" -- despite acknowledging the need to "pay for our pensions" somehow.

Trade unions and most opposition parties see it as a struggle over the French social system and a means to undermine Macron.

The former investment banker has made pensions a second-term priority despite losing his parliamentary majority in legislative elections in June.

"If Emmanuel Macron wants to make it the mother of reforms... for us it will be the mother of battles," warned the head of the hard-left FO union, Frederic Souillot, over the weekend.

"The government is right to be afraid," said Mathilde Panot, parliamentary leader of the hard-left France Unbowed (LFI) party.

The often violent display of defiance struck fear into the heart of government, leading Macron to promise a gentler, less authoritarian style of governing.

"I don't see another 'Yellow Vest' crisis happening," Cautres told AFP, even though he said the national mood was one of "pessimism, fatalism and anger" and a sense that "we're permanently in crisis".

Some in government are banking on the country acquiescing to a change that is widely disliked but viewed as inevitable, particularly given that most of France's neighbors have hiked the retirement age to 65 or beyond.

"There's a form of fatalism," an aide to Macron told AFP recently on condition of anonymity. "We're going to go through with it and people know it."

The government has also watered down some of its proposals, with the retirement age likely to be 64 instead of the 65 proposed by Macron.

There will also be a proposed rise in the minimum pension to 1,200 euros ($1,280) a month and greater provision for people who have not worked continuously, such as parents who took career breaks to care for children.

Critics see the changes as retrograde and unnecessary, even though official forecasts show the system in deep deficit in the coming decades because of the gradually ageing population.

"In 2023, will Emmanuel Macron be out of step with the era and shine as the president of the rich?" left-wing French economist and author Thomas Piketty asked in Le Monde newspaper on Sunday.

He said the reform might save the state up to 20 billion euros a year, but "the problem is that these 20 billion will weigh down entirely on the poorest" through longer careers.

As well as contending with strikes and protests, Macron's government will also need to cut a deal for support in a stormy parliament.

Negotiations are ongoing with the right-wing Republicans party.

Without their backing, Prime Minister Elisabeth Borne would have to use a constitutional power known as article 49.3 which enables her to ram through legislation without a vote -- at the risk of a no-confidence motion that would bring down the government.

Borne will unveil the outlines of the proposed law at 5:30 pm (1630 GMT) and will speak on French television later in the evening.