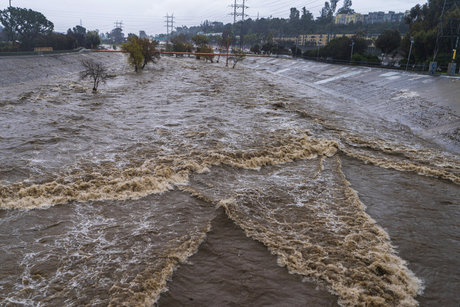 As Californians tally the damage from recent storms, some are taking stock of the rainwater captured by cisterns, catches, wells and underground basins — many built in recent years to provide relief to a state locked in decades of drought.

The banked rainwater is a rare bright spot from downpours that killed at least 20 people, crumbled hillsides and damaged thousands of homes.

In the four years since Californians approved a measure to invest hundreds of millions of dollars each year to build small and medium-sized infrastructure projects that collect rainwater, experts say progress has been gradual, but not insignificant.

In Santa Monica, a new water project captured nearly 2 million gallons (7,600 cubic meters) of runoff that once treated gets used for plumbing, irrigation or pumped back into the city's aquifer.

Sunny Wang, water resources manager for the city, said the project will eventually save an average of about 40 million gallons (151,000 cubic meters) per year.

The vast majority of rainwater in California's cities eventually flows into the ocean. In Los Angeles, a complex system of dams and paved flood control channels steer water away from roads and buildings and out to sea as fast as possible. The century-old infrastructure was designed to prevent urban flooding.

From the concrete-lined Los Angeles River alone, which starts in the San Fernando Valley and ends in the ocean in Long Beach, 58,000 acre-feet of stormwater was sent out to sea during the recent storms, said Kerjon Lee, spokesman for the Los Angeles County Department of Public Works. That's about 20% of Nevada's allotment from the Colorado River each year.

"It's a big number we're capturing, but it's a small percentage of the watershed," Wang said. "Billions of gallons of stormwater enter Santa Monica Bay each year, so 40 million sounds like a lot but it's just a first step towards more investments we need to make."

Santa Monica says its Sustainable Water Infrastructure Project is the first of its kind in California. Most people would hardly know it exists.

Hidden under a newly paved parking lot next to a county courthouse, the wastewater treatment plant filters and purifies sewage and runoff simultaneously to produce water that exceeds state and federal drinking water regulations.

County officials say the water being saved matters — not just to bolster water supplies but also to prevent contaminants picked up by rainwater from flowing into the Pacific Ocean.

Pestrella, the county's public works chief, said the stormwater captured over the past few weeks could be enough to prevent the Metropolitan Water District of Southern California, which supplies major population centers including Los Angeles and San Diego, from imposing the strictest water restrictions next spring and summer.

To escape the drought, Pestrella added, "we need at least three years of this kind of rain."

Most of Los Angeles' water isn't from its own watershed, but from a vast storage and delivery system that carries snowmelt from the Sierra Nevada range in Northern California and the Colorado River to the east.

County officials say the government has invested $400 million from the statewide effort to increase local water supplies by rainwater capture in more than 100 regional projects, most of them new, over the past two years. Officials expect the projects in Southern California to be completed within eight years and said they could provide enough water for 500,000 more people in Los Angeles County.

The county's longer-term goal — over the next 30 years — is to collect 300,000 acre-feet from captured stormwater, or enough to serve up to 900,000 households annually.

Bruce Reznik, executive director of the environmental nonprofit Los Angeles Waterkeeper, called scaling up rainwater capture projects in Los Angeles "a race against time," because of drought and the state's over-tapped water sources. He said a sluggish permitting process is partly to blame.

"We're starting to make strides, but we obviously need to be doing better," Reznik said. "In the last few years, people have gotten increasingly serious."

In the Willowbrook area of South Los Angeles, Earvin "Magic" Johnson Park sits on a former oil storage field that later was partly developed into a housing project. Now, the 104-acre park with two lakes, a playground, exercise equipment, and a community center also collects runoff from storms.

The renovation was finished in 2021. For the majority of people walking around the lakes, the park is simply a nice place to walk. Ducks circle the lake in pairs while Canada geese honk from a small island.

"It's safe, quite peaceful and it's just beautiful," said Barbara Washington Prudhomme, a retired postal worker.

She was unaware of the other benefits of the park — that a small structure near the lake was recycling filthy stormwater runoff captured from storm drains that would have flowed out to sea and using it to fill the lake or irrigate the grass when needed.

When told about the park's design that allows it to capture and divert up to 4 million gallons (roughly 15,000 cubic meters) per storm, she was impressed.

"That's a good system if it works," she said.