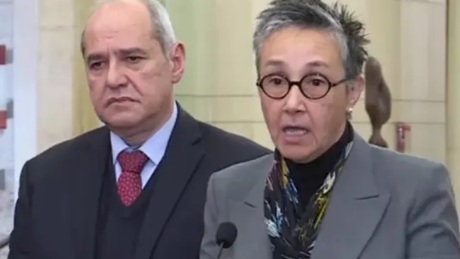 MP Melhem Khalaf and Najat Saliba of the Change parliamentary bloc on Thursday began an open-ended sit-in inside parliament to press for an end to the presidential deadlock.

In a statement, Khalaf said he will not leave parliament until MPs hold successive and open-ended sessions to elect a new president.

“This is not a symbolic move; we are implementing the constitution,” Khalaf said at a joint press conference with Saliba.

“Article 75 obliges parliament to convene in a continuous manner,” he added.

MP Firas Hamdan, also of the Change bloc, later announced that he will join Khalaf and Saliba in their sit-in and that the three lawmakers will not leave parliament until a president is elected.

Khalaf and Saliba “are equipped to stay until the next session, despite all the practices that might happen, such as the closure of bathrooms and the shutdown of electricity,” MP Paula Yacoubian said.

“We have discussed this with (Deputy Speaker) Elias Bou Saab,” she added.

Kataeb Party chief MP Sami Gemayel for his part said: “Melhem Khalaf and Najat Saliba’s move was not coordinated with us and we will study the possibility of joining them in parliament.”

Bravo to the real officials that care about this country

The biggest problem in all this was the reelection of Berri as speaker. He is a not a speaker but warlord who run parliament as his own house. For god's sake he and his cronies doesn't even vote and yet he is 'speaker"

"Thawra Mp's" have let us down, what a shame!

It’s not shameful, it was all a sham.