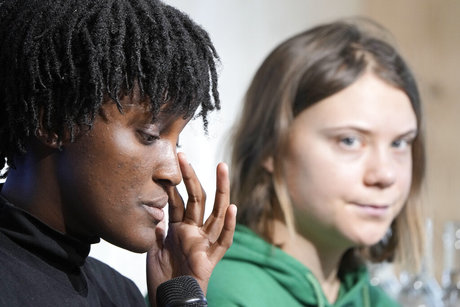 Greta Thunberg and other young climate activists held a small protest on Friday accusing the global elite at the World Economic Forum in Davos of doing little to save the planet.

Some 30 protesters gathered in freezing temperatures down the road from the WEF congress center, holding signs reading "SOS" and chanting "What do we want? Climate justice! When do we want it? Now!"

"One thing I don't think we realize and feel and comprehend in places of such wealth and power and greed is that planet Earth around us is in immense, immense pain," said Pakistani campaigner Ayisha Siddiqa, who attended WEF panels this week.

"The delusion of this event is so absolutely ridiculous. It's horrendous," said Siddiqa, whose country was hit by devastating floods last year that killed more than 1,700 people and caused tens of billions of dollars of damage.

Thunberg, who was briefly detained by police in Germany earlier this week during a protest against a coal mine expansion, did not speak during the Davos demonstration.

She participated in a panel discussion on the sidelines of the WEF on Thursday, where she accused the global political and business elite attending the forum of "fueling the destruction of the planet".