European delegation ends 1st round of questioning in Lebanon 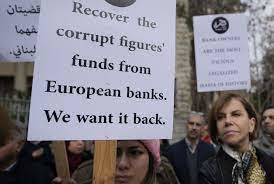 A European legal team has wrapped up the first round of questioning of Lebanese bankers and current and former Central Bank officials in Beirut. The questioning is part of a probe on money laundering linked to Lebanon's Central Bank Governor Riad Salameh.

The European judicial delegation -- with representatives from France, Germany, and Luxembourg -- questioned nine people this week, including current and former central bank officials as well as the heads of several commercial banks, several Lebanese judicial officials told The Associated Press.

The delegation arrived in Beirut earlier this month to interrogate embattled Central Bank Governor Salameh and more than two dozen other people, some of them his close associates, in a European money laundering investigation of some $330 million.

In March last year, authorities in France, Germany and Luxembourg froze more than $130 million in assets linked to the investigation.

There have been reports that a brokerage firm, Forry Associates Ltd., owned by Raja Salameh -- the brother of the Central Bank governor -- was hired by the Central Bank to handle government bond sales in which the firm received $330 million in commissions.

The governor, who has denied all charges of corruption, calling them politicized, said earlier that "not a single penny of public money" was used to pay the brokerage firm.

The Lebanese chief prosecutor's office on Friday said Lebanese judicial officials helped the European delegation in the investigation regarding money transfers in the three countries. It did not provide any further details.