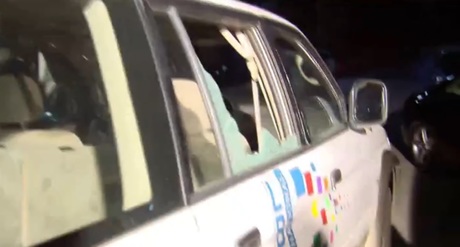 A video aired by the channel showed several vehicles with broken windshields and a metallic wall hit by shrapnel.

The incident comes after the comedians Hussein Kaouk and Mohammed Dayekh and the TV network received threats over a comic sketch that some deemed offensive to Shiite Muslims.

The sketch is from the first episode of Kaouk and Dayekh’s new comedy show ‘Taa Ello Byezaal’ and the duo had faced a similar backlash over a show that was aired on al-Jadeed television.

Caretaker Prime Minister Najib Mikati held a phone call with LBCI chairman Pierre El Daher in the wake of the grenade attack, stressing that “investigations will be intensified until the circumstances of the incident are unveiled.”

“The freedom of the responsible press will remain safeguarded and will not be intimidated by any attack,” Mikati added. He also inquired about the safety of the network’s employees.

The glorious "resistance" at work. Labayka ya Hassin

Apparently their lack of a sense of humor and propensity towards violence may be factors here.