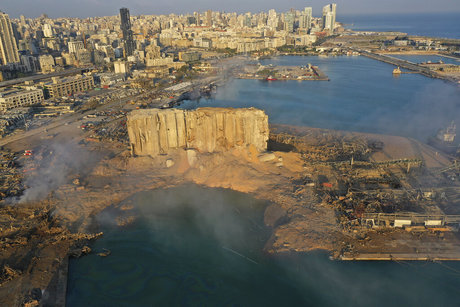 The Lebanese judge probing the devastating 2020 blast in Beirut port has resumed work, over a year after political pressure brought the investigation to a halt.

Here are some key facts about the blast and its aftermath.

On August 4, 2020, one of history's biggest non-nuclear explosions destroyed most of Beirut port and the surrounding areas, killing more than 200 people and injuring over 6,500 others.

French President Emmanuel Macron, during a visit to the Lebanese capital two days after the blast, called for an international probe, which then-president Michel Aoun rejected.

Other moves since then for an international investigation have also been rejected by Beirut.

The tragedy struck Lebanon as it was battling what the World Bank later called one of the world's worst financial crises in 150 years, fanning demonstrations against the government.

Under pressure from protesters, on August 10 Hassan Diab stepped down as Lebanon's prime minister.

Relatives of the victims have been holding monthly vigils for more than two years, seeking justice and accountability.

A domestic probe into the cause of the explosion was launched, but has failed to hold officials accountable.

But Sawan was removed from the case two months later over accusations of breaching the constitution.

The victims' families have placed their hopes in his replacement, young and motivated judge Tarek Bitar, who soon found himself up against Hezbollah and its ally Amal.

Bitar had been repeatedly forced to suspend the probe in the face of legal challenges.

His attempt in late 2021 to have ex-finance minister Ali Hassan Khalil of Amal arrested triggered deadly clashes in Beirut.

On Monday, a judicial source told AFP Bitar had resumed his investigation after a 13-month halt.

The port blast and stymied probe compounded the disaffection with Lebanon's political elite that had sparked a popular revolt in October 2019.

Hezbollah and its allies lost their outright majority in May 2022 parliamentary elections, but their opponents also failed to take power.

Prime Minister Najib Mikati's government has remained in place in a caretaker capacity with limited powers, unable to enact the sweeping reforms demanded by international lenders to release a multi-billion-dollar bailout.