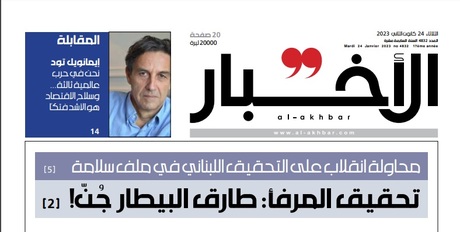 A U.S. State Department spokesperson said in a tweet Tuesday that "we support and urge Lebanese authorities to complete a swift and transparent investigation into the horrific explosion at the Port of Beirut".

The lead investigator into the blast, Judge Tarek Bitar, had decided Monday, to widespread surprise, to resume his probe into the disaster, despite the strong political pressure against him.

"Port investigation: Tarek Bitar has gone mad," ran the headline of the pro-Hezbollah daily al-Akhbar, which also accused him of acting "on the basis of American orders and with European judicial support".

Hussein Khalil, the political advisor of Hezbollah chief Sayyed Hassan Nasrallah, told reporters that Bitar's investigation was a "black stain" on Lebanese justice, and MP Ghazi Zoaiter called him 'mentally ill' after being summoned for interrogation.

The judge also summoned at least 14 politicians and judicial, security, and customs officials for questioning throughout February.

Al-Akhbar is the occupation newspaper and Basij mouthpiece. We can't keep allowing this criminal organization created, armed and indoctrinated by the Basij called Hizbollah and its mercenary newspapers killing Lebanon and sucking the blood of our society and democracy. Our secret weapon is out diaspora and organizing a million-plus Cedar Revolution II to show the world that we will not allow occupation and teorror by the Basij. Our twin brothers are the freedom seekers in Iran that formed the Green Revolution and were massacred by the Basij, similar to our M14 martyrs from Hariri to Tueni, Jemayel, Shath and many others. Both diaspora should unite and hopefully plan simultaneous Cedar Revolution II and Green Revolution II as we're facing the same criminal Basij. People wake Up!

The freedom of the press shouldn’t be attacked, but nothing prevents Lebanon from attacking the flow of money feeding the terrorist propaganda be it Daesh or Hizbala.

Agree! Freedom of the press is sacrosaint. No one is calling to closr Al-Akhbar, just pointing to the obvious.