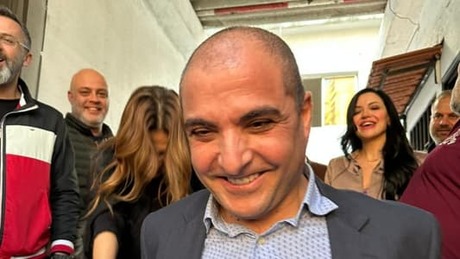 All detainees in the Beirut port blast case were released on Wednesday after State Prosecutor Ghassan Oueidat ordered their release in a move disputed by the lead investigator in the case Judge Tarek Bitar.

A picture circulated by media outlets showed Customs chief Badri Daher smiling in his home following his release. He had been detained on August 7, 2020, three days after the catastrophic blast which killed over 215 people, injured more than 6,500 and destroyed entire neighborhoods.

"Oueidat did the right legal thing," Daher's lawyer, Celine Atallah, said. Daher himself was not available for comment.

Mody Koraytem, the sister of the former port authority head, said the detainees' release was long overdue and she claimed that they were all innocent.

"As port administration there wasn't anything they could have done about it (the ammonium nitrate)," she said, adding that they did their jobs given that the judiciary cleared the deadly cargo to enter the port.

William Noun, a spokesman for the relatives of the victims, meanwhile told MTV that the families were “shocked” by Oueidat’s decisions.

Asked about the steps that they will take, Noun said that the families will study their moves after consulting with their lawyers.

“If the decision to release the port detainees is implemented, we will certainly act on the street,” Noun added, lamenting that “the current situation was caused by the judges who implement agendas and do not respect the law.”

“What’s happening in the judiciary is a farce,” Noun said.

“The release orders must be signed by Judge Tarek Bitar before obtaining the authorization of Judge Oueidat, after which the detainee would be released,” Noun added.

“What’s happening will make us call again for an international investigation,” he went on to say.

Enough with the protests, get a mile long of rope, storm the Palais de l'Injustice and hang them all! Repeat the process with the warlords and terrorists.

Another article illustrates what will happen to the Beirut Blast culprits.

Guess what, Oueidat was also involved! It's important to keep in mind that Oueidat is Ghazi Zoaiter's brother in law.