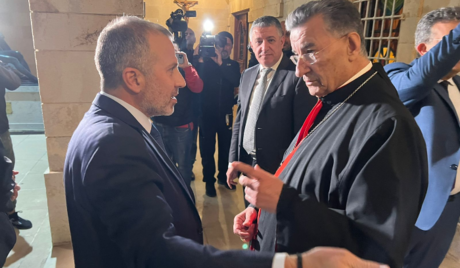 Free Patriotic Movement chief Jebran Bassil met with Maronite Patriarch Beshara al-Rahi on Wednesday evening after which he warned against “bypassing the Christian component” in the presidential vote.

“There can be no solution except through the election of a president,” Bassil said from Bkirki after the talks.

“That’s why we reiterate our call for dialogue and rapprochement with everyone and Bkirki is the most appropriate place for such a dialogue,” Bassil went on to say.

Noting that the presidential post is for all Lebanese, the FPM chief, however, stressed that “no one can bypass the Christian component in it.”

“We will not allow such attempts to pass,” he emphasized.

Bassil added: “We view any remarks about bypassing the Christian component with a lot of negativity.”

And noting that “Christians should seek to have their main say in this juncture,: Bassil said that “the initiative remains in the hand of the patriarch” and that the FPM “will cooperate with any such initiative.”

Bassil’s remarks come a day after MP Ali Hassan Khalil said that Hezbollah and the Amal Movement are willing to push for Suleiman Franjieh’s election as president with 65 votes even if he does not win the support of any of the two main Christian blocs – the FPM and the Lebanese Forces.

"election except through consensus,” Bassil added.

Bassil was and will always be the perfect disposable Useful Idiot and evil political prostitute. While pretending to protect Christians, no one in two thousand year history caused more damage to Lebanese Christians, their reputation, their livelihood than Bassil/Aoun. They are a curse worse than the plague. They sold Lebanon to the Basij for 30 pieces of silver including our freedom, democracy, independence and dignity. This destroyed people's lifetime savings and pensions. Scarified our institutions. The civilized world abandoned us because Bassil has made Christians synonymous with Basij and took corruption and incompetence to Guinness World level. Gebran Bassil just shut up!

The only way out of this vegetable market style negotiations is : suffrage universel direct.

The people of all sects elect the president, PM and Parliament speaker . Vox populi, vox dei …

Come down off the cross we can use the wood.

I'm not sure why FPM still speak like they are the biggest block and they represent Christians, most of the FPM candidates came to win because of shia votes!