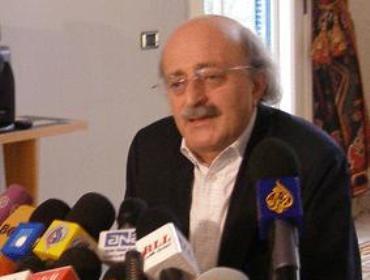 At a seminar organized by the Friends of Kamal Jumblat Association on the topic of “The Rise of Islamists and Fundamentalism to Power in the Arab Countries”, Jumblat reassured that “the revolutions in Egypt, Tunisia and Libya -- which were liberated from the chains of the regime -- are not in danger.”

“But we fear for Syria, where we heard about a miracle today, which was the issuing of a new constitution and abolishing Article 8” of the old constitution, which stipulates that the ruling Baath Party is the “leader of the state and society.”

“The Baath Party is replicating itself and the best thing for it to do is to step down,” Jumblat added.

"President Bashar al-Assad issued today a decree setting Sunday, February 26, as the date for the referendum on the proposed constitution," the official SANA news agency reported.

Assad has said the constitution would usher in a "new era" for Syria, the agency reported.

Under the new charter, freedom is "a sacred right" and "the people will govern the people" in a multi-party democratic system based on Islamic law, state television reported.

Criticizing Russia and China, which have recently used a rare double veto at the U.N. Security Council to block a resolution condemning Assad’s brutal crackdown on dissent, Jumblat said the two countries want Assad to remain in power in order to preserve their interests.

“They have refused any Yemen-style settlement and the situation will become worse should the bloodshed persist,” he added.

Addressing the Lebanese situation, Jumblat said: “The Taef Accord is dead, we need a ‘new Taef’ between the Sunnis and the Shiites, hence a new settlement.”

Jumblat’s remarks come one day after ex-PM Saad Hariri reiterated adherence to the 1989 Taef Accord during the rally held by the March 14 forces to mark the seventh anniversary of the assassination of ex-PM Rafik Hariri.

walid beik is absolutely right, we lebanese have our constitution..we do not need taef, doha or any bedouin accord...we just need THE LEBANESE CONSTITUTION ON THE 10452

Mmmmhhhhh left, right; Assad, Hariri; red, blue... This guy can't make up his mind. He's known to be a fine politician but what I need to hear from him is the reason why he sided with the terrorists and assassins? If its to spare the Druze community from a bloodshed, then he should say it loud and clear because assumptions are not good enough anymore, not after that many tergiversations.

agreed.. where did u get that word from.. tergiversations... long live thesaurus.com :). You still have to admire the guy..ie. Walid Jumblatt

That word is common in French!

I agree with most of Junblat's criticism of the Syrian regime. But, since he is the leader of the "Progressive Socialist Party" how come he is not denouncing the oppression and the killings by the Tyranical Saudi regime?

Nothing is cast in stone. What was agreed upon in 1989 in Taef could be changed to a secular system of government with laws inspired by the principles of freedom and justice that are adopted in true democratic countries.
If all are ready to forsake their attachment to other countries and confirm their belonging only to Lebanon, if all they are ready to declare lebanon as a final country with no ambitions to turn it into an islamic republic then Taef could die in peace... Otherwise lebanon will remain unstable and unsafe.

They all replicate themselves, and no one does it better than the Jumblat Clan (including 90% of our esteemed Political Class in Lebanon), and the mindless folks just tag along.

@wanabqua, my recommendation to you is to put off drinking lots of water until Dr. Samir Ghalabawi comes out with a another batch of new predictions with more precise dates than before for fear that you will do it on yourself. But then guys like you are known to do it on themselves all the time. Don't say I didn't warn you.

I recently watched "Lawrence of Arabia" again, and i've noticed something interesting, when they took over Damascus they went back to their tribal roots and just left the Parliament and walked out of the country back to the desert, its very interesting to see that nothing much has changed since then at least back then arabs still had some honor, the reality guys is that "Arabs" weren't really made to rule cities or govern, they always need someone from out there to organize the chaos, I always did say we had a far far better country when the french where here, now I wish they had stayed at least they would've given us 24/7 electricity, roads, communication, and a nice visa exit to europe whenever we saw fit, now I am living in a world of dancing monkeys and ruthless murderers, under the pretext of "secterian nationalism" while they swim in pools of blood.

Constitutions are for countries that live under the rule of law, not mafia rule or the law of the jungle. For countries such as Syria, constitutions are mere window dressing and it matters not what the document says. If the mafia regime is served by the law, the dictator cites the law; and if the law does not favor the dictator, then the document is disregarded. Lebanon under hezbollah is the same.

the filthy zionist media scum hallucinate something regarding dictators and syria and our glorious resistance.

Yep TAEF is bad for Christians.

Lets go to the tripartite agreement.

taef gave the christians half the parliament, how is that bad lol?? in any new "taef" epsecially post syria-regime-change, 90 percent of the pie would be divided between the sunis and she3as, christians would be left with the crums, if i were christian i would hold on to the current formulas.

"We need a new Taif between Sunni and Shia"? What about the Christians. Taif as written is good for the Christians and so for Lebanon. Taif as implemented was a disaster as it legitimized the Syrian occupation and left their leaving at Assad's discretion. The occupation persisted for 15 years after Taif until finally the Lebanese had enough.
The essential accommodation to make Lebanon to be Lebanon is between Christian and Muslim, not between Sunni and Shia.

Are you ready to do a new census to know if the population justifies a 50-50 division Cross and Crescent? I'll bet it's more like 25-75.
With numbers like that, it doesn't matter what the laws say on paper.

how come everyone here is so fluent in English ?! lol. i really need to know the reason . I scanned the conversations and could not even find one single mistake! proud of you people ...proud to be lebanese !!