Iraqis Demonstrate for Reforms in Baghdad 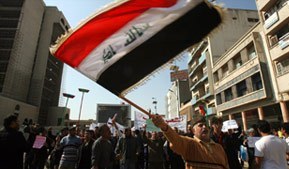 Dozens of Iraqis demonstrated for reforms in Baghdad's Tahrir Square on Friday, the eve of the first anniversary of mass protests in which 16 people were killed across the country.

Security forces had a heavy presence in the square, with soldiers armed with wooden clubs, pistols and assault rifles surrounding the area where the demonstrators were gathered.

Groups of policemen with Kalashnikov rifles were also deployed, as were various army and police vehicles mounted with machineguns.

"The demonstration is to remind the government that the February Youth (protesters) and the youth of Tahrir Square still continue to protest as long as there are demands that are not realized," said Muayid al-Tayyeb, who led chants at the protest.

"A year has passed since the protests and the government has not made any effort to realize the demands of the protesters," he said.

The demonstrators' requests include improvements in services such as electricity and fighting corruption, Tayyeb said.

"But when the government faced these demands with repression, our request became new elections."

On February 25 last year, 16 people died and more than 130 were wounded in clashes with police during demonstrations across Iraq.

Two days later, Prime Minister Nouri al-Maliki gave his cabinet 100 days to improve the delivery of services to Iraq's people or face "changes," but no one was ever fired.

In January, Human Rights Watch said Iraq is falling back into authoritarianism and headed towards becoming a police state.

"Iraq cracked down harshly during 2011 on freedom of expression and assembly by intimidating, beating and detaining activists, demonstrators and journalists," HRW said.