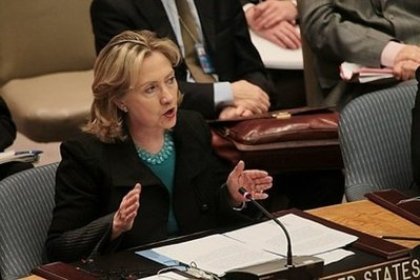 There is "every possibility" that Syria could descend into a civil war which could be worsened by foreign intervention, U.S. Secretary of State Hillary Clinton told the BBC on Sunday.

"I think that there's every possibility of a civil war. Outside intervention would not prevent that -- it would probably expedite it," Clinton said in an interview conducted in Rabat, Morocco.

The comments were aired two days after Arab and Western foreign ministers met in Tunis to discuss the Syrian crisis and expressed sorrow at the ongoing bloodshed.

"As you try to play out every possible scenario, there are a lot of bad ones that we are trying to assess -- while keeping our eye on the need to get humanitarian aid in, to try to do everything we possibly can to support the Syrian opposition ... and we're trying to help push a democratic transition.

"It took more than a year in Yemen, but finally there was a new president inaugurated. People kept being killed all the time, so these are very painful situations, there is no getting around it.

"I feel like everyone else watching the video, and I also have the additional information that comes from all kinds of intelligence sources.

"I know how terrible things are in parts of Syria. Other parts are totally unaffected. So this is a difficult but necessary engagement for the world to stay focused on," she added.

Before the weekend, Clinton said Friday that the international community must work to change Russia and China's positions against measures to stop the Syrian regime's crackdown. Both nations have vetoed two U.N. resolutions.

She told the BBC on Sunday that there was still stiff opposition to any intervention.

"We still have a very strong opposition to foreign intervention, from inside Syria, from outside Syria," she said.

"We don't have the United Nations Security Council approval, legitimacy, credibility, that comes with the international community making a decision.

"We have a very dangerous set of actors in the region -- al-Qaida, Hamas, and those who are on our terrorist list, claiming to support the opposition.

"You have many Syrians more worried about what could come next. So I don't want to say that nothing can be done, because I don't believe that and I feel like we are moving to the best of everyone's ability.

"But I want to make clear that, for anyone that is watching this horrible massacre that is going on, to ask yourself: okay, what do you do?

"If you bring in automatic weapons, which you can maybe smuggle across the border -- okay, but what do they do against tanks and heavy artillery? So there's a much more complex set of factors."

She added: "Part of the reason for the Tunis meeting was to see whose side who was on."

During a press conference in Rabat Clinton also appealed "to the members of the Syrian army to put their country first" and not shoot at civilians.

She denounced the "brutal attacks" taking place in Syria and said soldiers who back Assad were dishonoring themselves.

"The longer you support the regime's campaign of violence against your brothers and sisters, the more it will stain your honor," she said, adding those renouncing violence would be viewed as heroes.

The Syrian troops told Clinton to put the interests of her country first not those of the Zionists.

The troops and the opposition should be fighting to liberate the Golan Hights.

Had she put her mouth where she should have a long time ago, neither she nor her husband would have had to deal with the scandal of plumpy Monica.

A funny one. LOL