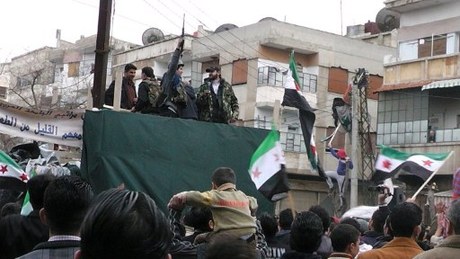 177 Syrians were killed on Saturday, mostly civilians, including 6 defected soldiers in clashes between the regime army and the Free Syrian Army across the country.

“We were able to control arms depots for the Syrian army,” Asaad told the satellite channel.

Local Coordination Committees said that the Syrian forces killed 77 including 55 in Idlib among them 47 defecting soldiers.

8 people were killed in Reef Damascus, the committees said, in addition to 5 in Homs, 4 others in Hama, 4 in Daraa and 1 in Deir al-Zour.

The Syrian Observatory for Human Rights said that “6 citizens were killed near Idlib.”

In Reef Aleppo, a citizen and a defected lieutenant were killed in clashes.”

As the condemnation spiraled so did harrowing accounts of the situation inside Homs.

On Friday a seven-truck convoy organized by the International Committee of the Red Cross (ICRC) and the Syrian Arab Red Crescent Society was barred from entering Baba Amr.

Syrian authorities said the decision was taken for security reasons, namely the presence of bombs and landmines.

"The Syrian authorities must open without any preconditions to humanitarian communities," he said. "It is totally unacceptable, intolerable. How as a human being can you bear... this situation?"

By Saturday afternoon the Red Cross said that none of its teams had entered Baba Amr.

ICRC chief Jakob Kellenberger said it was "unacceptable that people who have been in need of emergency assistance for weeks have still not received any help."

HRW, quoting accounts from journalists and residents who had fled, said that heavy shelling of the city's Baba Amr district would start every day at around 6:30 am and continue until sunset.

It said 122 mm howitzers and 120 mm mortars were used, as well as the Russian-made 240 mm mortar, which it quoted an arms catalogue as saying is designed to "demolish fortifications and fieldworks."

It noted that Baba Amr has been an opposition stronghold since anti-regime protests erupted last March, but stressed this presence "in no way justifies the scale and nature of the attack."

The United States has called on all countries to condemn the "horrific" brutality in Syria while French President Nicolas Sarkozy said what is happening "is scandalous."

A major blow for the dictator's army. Yet, the road remains long for the Free Syrian Army.

for the heartache you caused in Lebanon. This is sweet news. May you all cancel each other out. I do feel sorry for the woman and children.

I thought the Assad regime has already fallen 6814 times since 2005 according to your almost-daily predictions and those of Gabby, peace, thepatriot, slah, allouchi... some dating back to 2005. And now you are predicting that the rebels will start getting serious weapons. Perhaps you are talking about anti-tank missiles and no-fly zones?

Lol. So 177 dead. 100 of them are Syrian Arab Army soldiers. 50+ of them are armed terrorists. Yet somehow, the article starts off with "177 Syrians were killed on Saturday, mostly civilians...."

Let's see how many thumbs down I get for this comment, which will represent the number of naharnet readers that can't do basic math.

The assad regime is fighting 'terrorists' that's why they won't let the emergency workers in to help civilians in Homs...because they are protecting them by letting them starve and die from injuries.

hitler didn't burn the Jews by his own hands* same here*

Look who s talking.hypocrit neon.ur comments in regards to jewish?
And no joesi i dont feel sorry for any of them.Hopefully it will go on for 30 years

So who was the one responsible for wat happened in lebanon neon??