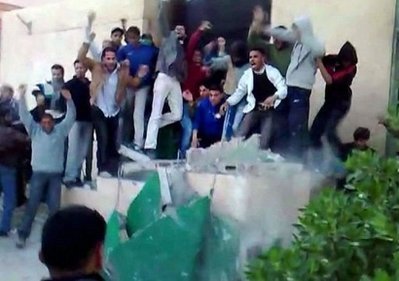 Anti-regime protests spread closer to the Libyan capital Sunday amid new fighting in the flashpoint city of Benghazi, as Human Rights Watch said it feared a catastrophe with more than 170 people dead in an iron-fisted crackdown.

As the death toll continued to rise, world leaders stepped up their pressure over strongman Moammar Gadhafi's response to the unprecedented challenge to his four-decade rule of the oil-rich North African country.

And in a crack in the regime's public face, Libya's envoy to the Arab League announced he was quitting and "joining the revolution."

"I have submitted my resignation in protest against the acts of repression and violence against demonstrators (in Libya) and I am joining the ranks of the revolution," Abdul Moneim al-Honi said.

The 68-year-old Gadhafi has himself made no public comment since deadly violence erupted on Tuesday.

Demonstrators there came out in support of residents of second city Benghazi, 1,000 kilometers east of Tripoli, who have endured the brunt of a crackdown in eastern Libya, they said.

"Lawyers are demonstrating outside the Northern Benghazi court; there are thousands here. We have called it Tahrir Square Two," he said of the Cairo square central to protests that brought down Egyptian president Hosni Mubarak.

Separately, others are "storming the garrison" and "taking fire from snipers," Mughrabi said, without elaborating.

Media reports said members of a Libyan army unit had told Benghazi residents that they had defected and "liberated" the city from pro-Gadhafi forces.

A doctor at Benghazi's Al-Jalaa hospital told AFP late on Sunday afternoon that 15 bodies had been brought in since 2:00 pm, bringing to 85 the number of fatalities there since Saturday morning.

Mughrabi said "at least 200 have been killed altogether (since the unrest began) but we can't verify from hospital. We are pleading for the Red Cross to send field hospitals. We can't take it anymore."

Speaking to Al-Jazeera television, one resident spoke of "out-of-sight massacres" in Benghazi.

"It feels like an open war zone between protesters and security forces," said Fathi Terbeel, a protest organizer.

"Our numbers show that more than 200 people have been killed. God have mercy on them."

In London, Human Rights Watch said at least 173 people had died since Tuesday.

"It's a conservative figure based on hospital sources in eastern Libya, Benghazi and three other places," HRW's Tom Porteous said. "It is a very incomplete figure and there are also a very large number of wounded.

"According to medical sources in Libya the wounds are indicative of heavy weapons being used against the demonstrators."

Earlier on Sunday, Porteous had said "we are very concerned that under the communication blackout that has fallen on Libya since yesterday a human rights catastrophe is unfolding."

The United States strongly condemned the use of lethal force in Libya and called on Tripoli to allow peaceful protests after "credible reports" of hundreds of casualties.

"We are working to ascertain the facts, but we have received multiple credible reports that hundreds of people have been killed and injured in several days of unrest -- and the full extent of the death toll is unknown due to the lack of access of international media and human rights organizations," State Department spokesman Philip Crowley said.

"Libyan officials have stated their commitment to protecting and safeguarding the right of peaceful protest. We call upon the Libyan government to uphold that commitment, and hold accountable any security officer who does not act in accordance with that commitment."

British Foreign Secretary William Hague said he will raise the crackdown with EU ministers this week, and urged Arab nations to speak out.

"I think we have to increase the international pressure and condemnation," Hague told Sky News television.

"The United Kingdom condemns what the Libyan government has been doing and how they have responded to these protests, and we look to other countries to do the same."

Hague "expressed alarm at reports of large numbers of people being killed or attacked by Libyan security forces," a statement said. "The Foreign Secretary told Mr. Gadhafi that the Libyan government's actions were unacceptable."

EU foreign policy chief Catherine Ashton said that she was "really worried about what is happening in Libya," whose government has told Brussels to stop "encouraging" demonstrators or face a halt to cooperation on illegal immigration.

"We have been urging restraint and it is important to continue to do so," Ashton said. "It is very, very important that the violence stops."

And German European Affairs Minister Werner Hoyer expressed his government's "indignation" at the crackdown, speaking at the start of an EU ministerial session on the revolts sweeping the Arab world.

Around 500 people gathered outside the Libyan embassy in London to protest against the crackdown, police said.

In an emotional but peaceful demonstration, British Libyans chanted in Arabic: "It's our turn, it's our turn, Gadhafi is a dictator."

"My country is swimming in a pool of blood. People have been massacred openly in the street. It's a bloodbath," said Abdelwahb Naas, 56, a doctor.