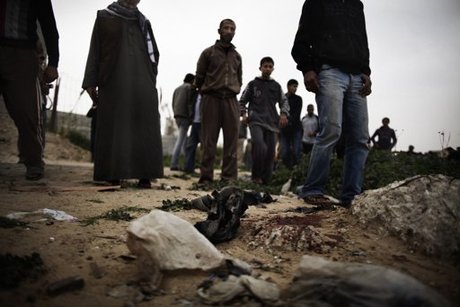 Syria condemned on Tuesday Israeli air raids on the Gaza Strip that killed 25 Palestinians, calling on world powers to act urgently to put an end to them.

Syria "roundly condemns Israeli aggression against the Palestinian people and urges the international community to undertake urgent steps to put an end to these activities and to sanction those responsible," said a foreign ministry statement.

The ministry also reiterated "Syria's support for the people of Gaza."

The statement came nearly 24 hours after an Egyptian-brokered deal came into force under which Israel and Islamic Jihad, responsible for most of the rocket and mortar fire that drew Israeli retaliation, agreed to hold their fire.

The violence began on Friday with Israel's assassination of the head of the radical Popular Resistance Committees (PRC).

That prompted militants to fire hundreds of rockets and mortar rounds into southern Israel, wounding people and prompting the closure of schools.

Palestinian medics put the total death toll late on Monday at 25, with more than 80 hurt.

Of those killed, 19 were militants and six were civilians, including two minors.

Now this is funny

They are criticizing the israelis because they are not as efficient as the shabiha militias in committing atrocities. The alawi militias are going to send their envoys to the tel aviv universities to teach the zionists the art of atrocities.

To Realist: if you want to learn how to make atrocities you should not go far away , you just can ask your parents how was it in Lebanon during the 70s. or to travel to Iraq.
Arabs do it better than Israel and to each other with greater success than Israel ever did to Arabs.
In Israeli universities we study how to make life better and as evidence the Nobel prices we receive year by year while Arabs can get the price for killing each other.
So look for nearest tree and hang your self.

thank goodness there is an arab power looking out for human rights..keep up the good work assad, daddy would be proud. i am being sarcastic by the way..

a Jew kills an Arab - war crimes ! Security Counsel emergency sess90j in the middle of the night !!! CNN 24 hour coverage !!
an Arab kills another Arab, and its the Weather Channel.