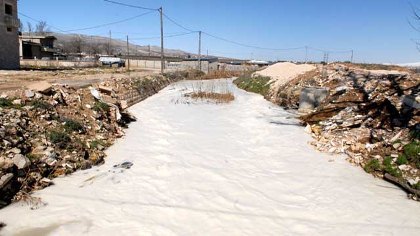 The Litani River temporarily turned white on Saturday, reported the daily An Nahar on Sunday.

It said that the incident occurred near the Tall Amara Bridge in the Zahleh district and did not affect the entire river.

The daily likened the color to that of milk, saying that the change may have been caused by the flow of calcified water in the river or the dumping of waste from a nearby rock factory.

Environment Ministry experts tried to determine the cause for the change, but to no avail.

lithani is changing colors because it's polluted from all the zionist comments on naharnet comments section :)

Jabalamel. I must admit that your imput is so constructive. Bloody hell, it must have taken you hours of thinking, reflecting, and analysing to come out with such a creative statement.

no, actually, patriotic lebanese can come up to something in a second, while traitors and zionist would take hours for same thing.

lol everything because of the 'cruel zionist' ,Jabamel thank you for all your comments ,it juste shows you how mch Israel needs to defend itself.

the filthy zionist slime trash scum filth is using my comments on naharnet comments section as a justification for existance of genocidal zionist entity.

yeah sure, believe in that...

jabalamel, man i have been reading naharnet for a while now. CANT YOU COME UP WITH ANOTHER WORD THAN "filthy" ??????? the only person that is "filhy" is you dude. Get a life!

finaly a decent comment. but you have to explain to the zionists what is arak, they don't know

FT, if no one shouts about it, ie. the Minister of Environment should be the first one to bang on the table, then some big shot is surely involved or someone is being covered. Who cares about environment, electricity, rotten meat and so on... and they tell you that Lebanon is a great and beautiful country, at this rate, we are on the right track to become the rubbish bin of the middle east in both, politically and environmentally.

Yi I thought first it was snow , then it was freezed ,then I realized it was in lebanon so I assumed its definitely not something natural , a plastic surgery gone bad like most of its women, or pollution by the poisonous words of politicians!

you are nothing but filthy zionist slime filth and scum

Crap I got infested with jabalamel, I AM FILTHY!

Dodgy Government turns a blind eye because someone gets paid to ignore red and white rivers in lebanon.

Habal !!!!!! where have u been mate.
We missed you habal comments.
Mazbout u were arrested for an unpaid elec bill ??
how dare they arrest ashraf el ness?

the filthy zionist media terrorists, worm and rat, slime and filth, trash, is hoping that i was in trouble because of electricity bill.

the next river will turn blue,
red, white and blue it's the Americans messing with filthy habalkamel's brain.. off course that's futile exercise, how can you mess with something that doesn't exist.

Maybe someone dumped ARAK in the river?
The environment in Lebanon is being decimated and no one cares!

To the competent Lebanese government and health ministry: Take 50 water samples from each incident and send them to labs around the world for testing. Let's get some accurate results. Come on, what next ? The water turning green in color? Oh wait, red, white and now green are the Lebanese flag colors.

It must be hassouni's shitting bricks of fear

the filthy zionist media propaganda machine needs a "aroos" because he is hallucinating and trying to say something but he is not..

Learn some new vocab words! Every article you comment on involves you blaming everything on the "filthy zionists". Whether its a fly dying or a bomb going off, its all because of those "filthy zionists" right jabal habal?

I can't imagine it's that difficult for a lab to get some samples and determine cause... What a corrupt country....

It's turning white to commemorate the purity of the angel Bashar Al Assad for his heroic actions in resisting Israel (zero actions) and his struggle against foreign bullies trying to pick on his great democratic government :(

it's only not clear the cause of your mental problems: didn't get enough of mother's milk, or they kicked you in the school too often?

The next color is green.....and then we'll have a nice Lebanese flag!

If the citizens care so much, why dont you people get a sampel of it and send it to any organisation?
If somebody can collect a sample, I would happily turn it in to an organization for examination.
My problem is just that I dont live in Lebanon currently.
Anyone interested send me your E-mail adress.

I am a water quality engineer and to have a sample withstand the travel time it has to be preserved properly, not just collected. Some constituents degrade with heat so the sample would need to be refrigerated, others need to be preserved by adding ammonia. For some biological contaminants the test should be performed within 48 hours. You can see from the picture how degraded the banks of the Litani are. A river like that should have a much wider riparian zone around it. Sadly it looks denuded. From the color, you can tell that the contaminants are not naturally occurring, but rather chemical in nature, from one of the neighboring factories. Rivers can be rehabilitated and restored, but we need to have the laws and regulations that would encourage that. We need a Clean Water Act for Lebanon.

I guessed that its not just to collect it and therefore we have people like you, knowing these things. Thank you for a nice and informative answer.

Government respond to Public/Civil society demands. And not the opposited.
If there isn't enough Lebanese public pressure on the government to do something - then why would the government bother.
Don't kid yourselves - Most Lebanese don't care about environment - all they care about is "Don't throw the carbadge in front of my house" and they don't care what is being done with it.
Yeah sure you will see an outcry from time to time to such events - like seeing Nahr Beirut red or Litani white. But in genreal the majority of Lebanese don't see dumping sewage - chemicals etc in rivers as a problam, and they are not exerting pressure on the government to solve it. And that's the real problem.

"Environment Ministry experts tried to determine the cause for the change, but to no avail." are you kidding me?? what kind of so called experts did they bring in? obviously none that could spell their name or find their way out of a wet paper bag. sounds very suspect to me. By the way Environment Ministry in Lebanon, isn't that an oxy moron?

it is when your traitor was in the post.

goverment officials??? which goverment? they are busy sharing the cake, no time to look into petty matters like pollution and expired products, hell even the diesel scandal didn't reach anywhere...must have evaporated

What a horrible country. People fighting even for rivers turning red or white. Its not a problem of Religion , sects or parties. Its a problem of people in general. Just to see how we Lebanese are corrupted deep down our soul. What i think it might be milk expired, such as the red colour was dumping of meat expired, since there is a wave of control these days againt expired food or other... Look at our brave citizens, dumping their shit in rivers. Ya haram ya lebnen, no electricity, no water, no laws, lebanese and non lebanese militias, rivers that begin to look like rainbows with the dumping of all kind of waste. This country is doomed.Its not the politicians that are the problem. Its the people, how many good left? 10-15 %? very few to stand up to all this filth.

neon the Palestinian, this is not a refugee site get out of here

they should hire us in Hollywood if one day they need in their movies Rivers changing colors!