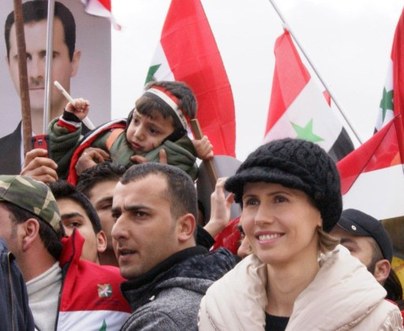 Canada tightened the sanctions Friday on Syria, targeting President Bashar al-Assad's wife, mother, sister and sister-in-law a week after the European Union made a similar move.

Stepping up its sanctions as fighting raged after an embattled Assad said he had accepted a peace plan to put an end to a year of violence that has left over 9,000 dead, Canada said it sought a "Syria that respects the fundamental rights of all its people."

The four Assad relatives were among 12 people and two oil companies added to an existing Canadian blacklist now totaling 127 people and 41 entities.

Under Canada's seventh round of Syria sanctions, those cited will be subject to an asset freeze and a prohibition on economic dealings.

"These latest sanctions target in particular those who profit from their association with the regime and those closest to Assad, including his wife Asma," Baird said.

"Assad's family may be kept shielded from the misery of the average Syrian, but they will not be immune from international will."

A stylish Western-educated former investment banker, Syria's British-born first lady was widely expected to give the regime a more human face and shatter the isolation of the secretive Assad family.

But she became the focus of sharp criticism this month when Britain's Guardian newspaper released e-mails showing the ruling couple shopping for luxury goods as the country slid into bloody chaos.

Baird is due in Istanbul on Sunday for a Friends of Syria meeting to head off the crisis.

The United States earlier hit Syria's Defense Minister Dawoud Rajiha as well as the army's deputy chief of staff and the head of presidential security with sanctions, with the Treasury Department saying it would hold individuals accountable for the bloody crackdown.

The EU sanctions -- the union's 13th round in less than a year -- were announced a week ago. EU foreign ministers reiterated a plea for Assad to "step aside to allow for a peaceful and democratic transition."