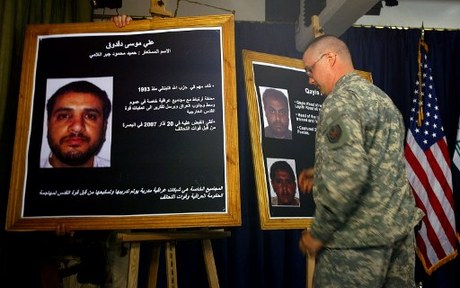 A delegation from Shiite cleric Moqtada al-Sadr's movement on Monday visited a suspected Hizbullah member being held in a Baghdad jail, the movement said.

"A delegation made up of three of Moqtada al-Sadr's advisers met today in a Baghdad prison with Ali Moussa Daqdouq," an official of the Sadr movement told Agence France Presse in the Shiite holy city of Najaf.

He said the aim was to check on the health of the Lebanese prisoner, to "let him know that Moqtada al-Sadr is praying for his release, and to inform him the Sadr bloc (with 40 MPs in parliament) is working for him to be freed."

Last December, as U.S. troops completed their pullout from Iraq, the White House said its last prisoner, Daqdouq, suspected of involvement in a January 2007 attack that killed five U.S. soldiers, was being handed over to Iraqi authorities.

The United States at the time accused Iranian special forces of using Hizbullah to train Iraqi militants and of planning the January attack.

The U.S. military said the Quds Force, a unit of the Iranian Revolutionary Guards, and Hizbullah were jointly operating camps near Tehran in which they trained Iraqi fighters before sending them back to carry out attacks in Iraq.

It said Daqdouq, captured in Iraq's southern city of Basra in March 2007, had confessed to training Iraqi fighters in Iran.

According to the U.S. military, many of the militants being trained in camps on the outskirts of Tehran were from "groups who have broken away from the Jaish al-Mahdi militia" of Moqtada al-Sadr.

no he was on pilgrimage... don t forget they only resist in lebanon, at least that s what they want lebanese to believe!