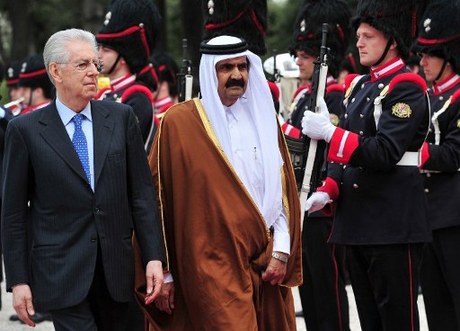 A U.N.-Arab League peace plan for Syria has only a three percent chance of working, the emir of Qatar said on a visit to Rome Monday, as a U.N.-backed ceasefire was marred by ongoing violence.

Sheikh Hamad bin Khalifa al-Thani told a press conference that the chances for success "are no higher than three percent", and that the Syrian people should not be supported through peaceful means but "with arms".

Qatar has taken a hawkish stance in favor of the year-old rebellion against Syrian President Bashar al-Assad.

Prime Minister Mario Monti, who stressed the "close collaboration" between Italy and Qatar on the topic of Syria, said Rome was willing to send in observers to help oversee a truce aimed at ending 13 months of bloodshed.

The observers' mission is part of the six-point peace plan that Syria agreed with U.N.-Arab League envoy Kofi Annan.

The U.N.-backed ceasefire came into force at dawn on Thursday, but since then, at least 55 people, mostly civilians, have been reported killed in violence.

The Syrian Observatory for Human Rights said on Monday that 11,117 people have been killed in 13 months of unrest -- 7,972 civilians and 3,145 military and gunmen, including fewer than 600 rebel fighters.

who is this little fuck to decide?

a pet that you and your friends thanked a lot in 2006 with huge billboards in dahiye... already forgotten? :)