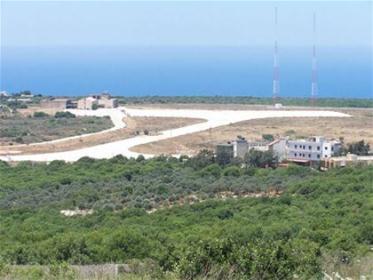 Lebanese authorities have refused to allow U.N. observers to land in the defunct Qulaiat airport in the North to give them quick access to the Syrian province of Homs, An Nahar daily reported Wednesday.

The newspaper said the U.N. made the request given that the airport is at close proximity to Homs and could be used for the possible evacuation of casualties.

An advance team of six members already arrived in Syria and is preparing for the deployment of a 30-person mission in accordance with a U.N. Security Council resolution which also calls upon the Syrian government to "implement visibly" all commitments under special envoy Kofi Annan's peace plan -- including the withdrawal of all troops and heavy guns from Syrian cities.

A new resolution with a full mandate will be required for the full monitoring mission of more than 200 observers.

The Lebanese decision to refuse the international request came over fears that the Qulaiat airport could be used as a “humanitarian corridor” to aid those in need in Syria, which Lebanon had rejected as part of its policy in distancing itself from the Syrian crisis, An Nahar said.

The last time the government discussed the possible operation of the airport came after Tourism Minister Fadi Abboud called for activating the tourism sector across Lebanon.

Why that? This is in line with Lebanons long wanted neutrality. It´s another discussion that this government, and other goverments, are not consistent with this. Ever sign of neutrality should be hailed.

Any concern for civilians should be dealt with through UN.

The day Lebanon becomes a world power, in the size of US, Russia or china, we can begin take firm stances. Till that date, small countries protects their interests by being neutral.

Ulpianus: deciding not to take action is taking action. By not helping the UN, Lebanon indirectly helps the ongoing oppression.moreover, the airbase was closer to Homs, the UN general assembly aproved unilaterally the mission (including china and Russia!!!!). So, there's no neutrality in not helping achieving the mission.

Benzona: In heart, I´m with what you are saying. But thinking about it, Lebanon has done enough of taking sides. Some people ( whom I disagree with) thinks there is terrorists attacking the regime in Syria. Some people think its the people agaisnt a brutal regime.

Whatever it is, its not our business. Our business is what happens on Lebanese soil ( for example the refugees).
If we accept this, the next step will be ( using the slippery slope theory) accepting attacks on Syria from bases in Lebanon...

SO, being repetitive, No attacks, observers or anything else against Syria or even israel from Lebanese land.

Why that? Give me a break! To be used for evacuation of casualties.

If indeed it's for that purpose....shame on you Lebanon (gov't.). This has nothing to do with politics and/or taking sides. It's the right thing to do from a humanitarian approach and necessity.

Tyrian: I understand the fact you're fed up with foreign meddling and interference(s) in lebanon. Our duty is to help refugees, sure but keep in mind that a small country in Lebanon will never be a world power.... Even European nations are declining. Perhaps th smart choice is to bet on the future by siding with growing powers such as India or china. syria isnt one of them.... Nor the arab world or Persia.

Without a doubt nor should Iran, Saudi Arabia or Israel interfere in Lebanon.

Like Sheikh Bachir use to say 'eveyone out - we dont need domestic or foreign interference in Lebanon and its affairs.'

Who is this Lebanese authority? the statement is vague and not very credible as far as I am concerned...The UN will approach the Gov. for such request and officially for this decision to be approved by the cabinet, if the see fit

Under what rock you live man ?! Or you just being idealist in cachotic rigon

Ya Flame... stupid...as always... you know darn well why they wish to land in Lebanon, that is to have quick access to Homs, and not be manipulated or slowed down by the regime. You should also know that this decision is political and not humanitarian. We are ruled by people embrassing the filthy Syrian Regime...people like you!

As for the stupidity of your reasoning...it remains unmatched. Congrats!

This stupid Government of ours is getting to the point that this country shall be called Syria. Every decision of our government is made in Syria... This mission is a UN mission that we are part of the governing world. When are we going to make decision in Lebanon about Lebanon?
Shame on all who take orders from Syria or any other foreign countries!

if you read carefully the bylaws of UN you'll see that the organization does not have the right to force any decision on a member nation (exept for article 7)thus it's only fair that Lebanon does not intefere in neighboring events (positive neutrality as were M14 shouting since years) and if someone wishes to Help the regime or the salafis let him do that from Syria not northern Lebanon.

Slash the laws only apply if it is convenient for them, they couldn't care less about palestine unfortunatley their hatred for Israel is greater and this justifes the means.

In a pure technical way, Qleyat airport is poorly equipped and I can understand that Lebanon may have reservations to use it regularly. The airport lacks all facilities of movement of goods and cargo and up to date scanners. The runways have no lighting and emergency vehicles may not be able to cope with any mishap.
If they want to use it, let them equip it properly so that it meets the UN (international) and local standards. Beirut airport is well equipped and can serve better. The UN uses Beirut airport for its UNIFIL operations in the south and accordingly, can use it for its missions in Syria. No need to make an issue out of it.

Lol stupid propaganda. A defunct airport of Lebanon can be part of a humanitarian corridor to "help" syrians in need who are under sanctions by the west? Yeah ok, sure! Why don't they use the Homs airport instead? It's much closer to Homs ya abadayat.

The syrian regime is under sancions genius not the thousands of displaced syrians fleeing this regime,living in tents and at risk of disease, this is where the humanitarian effort would be directed. As for Homs, it would be convenient for an army battalion to direct fire at one of the airplanes claiming it was the other side or vise vera, not a safe option.

finally a clever move!! let the Syrian problem stay in Syria and the lebanese problems in Lebanon. If M14 or M8 wish to influence the outcome of the Syrian events let them do that form Syria not from Lebanese soil, we have enough problems as is.

This decision has been made by the UN...idiot!

The decision not to allow is in direct line with the current pro syrian lebanese administration's policies. Has nothing to do with being neutral. lebanon is a founding member of the UN and has international 'responsibility' to act in accordance with UN directon. I cannot understand why a humanitarian effort has been blocked. We should consider the UN request with total disregard for whos feelings we hurt in syria or lebanon. It works both ways, Unifl supports peace in the south, lebanon helps the international community where warranted. This is called being a grown up and accepting your responsibilities.